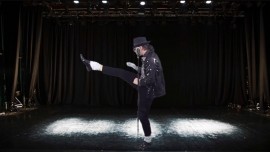 Bringing to you the magic of the “King of Pop” with show stopping, live, high tenor vocals, slick choreography and energy, by re-creating some of his most memorable performances, from the 70’s with The Jacksons, through to the mega stardom hits of the 80’s and 90’s.
: +44 771426XXXX Click here to reveal
full number

When contacting this member, please state that you are viewing their Entertainers Worldwide profile.
Request a Quote
Share this Page:
Profile Views: 296
Need Help?
✖