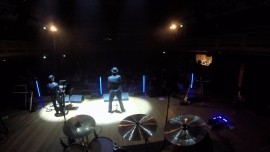 (no reviews)5.0
Country: United Kingdom
Based In: Gloucester, South West
Performs: Nationwide
From: 500.00

Neil Tennant has a clone Tribfest Festival They sound so like them it's unreal Glastonbudget Alternative have been a successful tribute band for the last eight years. During this time they have witnessed amazing venues and unforgettable crowds with an uncanny likeness to Neil Tennant and Chris Lowe.
Request a Quote
Share this Page:
Profile Views: 1093
Need Help?
✖