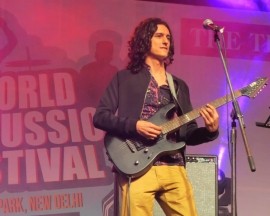 (no reviews)5.0
Country: India
Based In: India
Performs: Worldwide
From: Contact

Latin american traditional and folk music on the guitar and singing. Own compositions and covers. Can also be accompanied with other musicians being percussion, bass, and flute.
: +91 880027XXXX Click here to reveal
full number

A versatile guitarist and prolific composer from México, he began his music training in Flamenco and Classical guitar with the renowned Flamenco guitar player Fernando Martinez Peralta in Guadalajara, México. He went on to major in Composition in the Music Conservatory of Las Rosas in Morelia, Mexico.
He recorded his own musical project Radarama, a fusion of several musical influences, which was premiered at the San Salvi Cultural Festival in Florence, Italy in the summer of 2010. Between 2008-2010 he was the lead guitarist for Marasma Trio﻿ performing in Mexico and Europe. Marasma Trio ... were acclaimed for their exploration of diverse musical styles from around the world.
The november of 2010 he moved to India composing for various dance and music productions. He directed and co-composed the music for the acclaimed dance performances Not your mothers and Beneath the tamarind tree. His fascination for the classical Indian music and Indian instruments led him to study the sitar. Daniel is the guitarist of the New Delhi based latin music band, Latinjam. As a member of PULSEnsamble, he collaborated with several musicians and dancers in New Delhi.
On an aerial and music experiment with the aerialist and circus artist Shweta Garg, Circustrum was born. Circustrum is the merging and infusing of aerial tissues, rope and physical theatre with live music.
He is the guitar player and singer of Mallku co-composing with Dave Garay in the didgeridoo, flute and percussions. 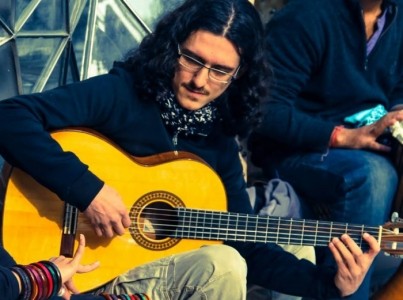