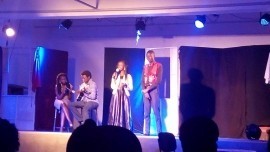 (no reviews)5.0
Country: Kenya
Based In: Kenya, Kenya
Performs: Worldwide
From: Sh200

Masharuri Band was formed in 2014 with four members, two vocalist/singers- Sharon and Muthoni, a guitarist- Maagu Karuri and Malelah Poet. This band has performed in various event, held its own events and been on Kenyas national television Broadcast as guest perfomers.
: +25471740XXXX Click here to reveal
full number

When contacting this member, please state that you are viewing their Entertainers Worldwide profile.
Request a Quote
Share this Page:
Profile Views: 226
Report this profile

Masharuri Band fuses music and poetry so well, it leaves you in awe. The band is flexible and can transverse across all cultures

he band began in 2014 with four members- two vocalists/singers- Sharon and Muthoni. a guitarist- Maagu Karuri and Malelah Poet. The band has perofrmed in various events within Nairobi city and even held its own events. It has been hosted on Kenyas National Broadcasting Corporation as guest performers.