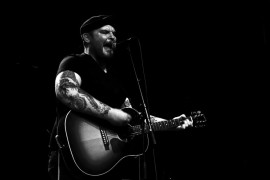 Experienced live bar/lounge musician with a large repertoire of well and lesser known songs and how to play a room.

Panic Anchor is the moniker for Glasgow based songwriter Andy McBride.
​
Starting in early 2014 Panic Anchor quickly became a mainstay of the local and national songwriter scene.
Comparisons are often made to Springsteen, Waits and Earle but always within his own Glasgwegian growl - a truly original voice that can soar to the height of a howl then instantly drop to a raspy whisper. A ferocious performer who prioritises playing live shows above all - an experience to remember.
Heavy Country [2017] is out worldwide now and features 'Hearts In A Hurricane' and 'Steel Swimming'. Andy als ... o recorded three other independent Panic Anchor releases - The Tennessee Sunday's EP(2014), Going Blind(2015) and Codeine, Wine & Patsy Cline(2016).
On top of regular residencies in his hometown of Glasgow in venues such as the renowned King Tuts, The O2 ABC, Broadcast and most recently SEC Armadillo for the national Country 2 Country festival, Andy also headlined a full UK Tour(2015), "Codeine, Wine and Patsy Cline" UK and Ireland Tour(2016) and "I'm Still a European" Euro Tour(2016).
​
To date Andy has shared a stage with a wide range of respected singers and musicians including Mick Hargan, Roy Zephyr, Bruce Foxton, From The Jam, Dave Arcari, Mike Tramp, July Talk, Katee Kross, Joe Purdy, Frankie & The Heartstrings, Eddy Gartry & Matt Andersen to name a few.