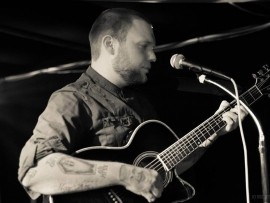 When contacting this member, please state that you are viewing their Entertainers Worldwide profile.
Request a Quote
Share this Page:
Profile Views: 442
Report this profile

Ben has been writing and performing music as a career for over 7 years. Ben delivers great original heart-felt Acoustic originals as well as a huge collection of well known and loved Covers, old and new.
With a great UK and European following under his belt from years of touring Pubs/Clubs/Cafes as well as private functions such as Weddings, Birthdays and general Celebrations.
Ben can provide all equipment needed for a live set if needed and ensures that there is something for everyone to enjoy in live sets.

Through out life, we are all faced with trails, hardships and obsticles to overcome. We learn from these experiences and ultimately become better human beings because of them. Everyone has there vice, there own personal way to deal and push through these times, and for Ben, like many other people, Music (or for better use of a word, Art) has been and still is the vice, the outlet and passion that has helped shape him, helped him grow, healed and saved him and will always continue to be.
Benjamin Callanan is an Acoustic Artist/Singer/Songwriter originating from Peterborough, Cambridgeshire, UK ... .Benjamin was born in Huntingdon in 1989 and grew up in a middle class surrounding. At a very young age he developed an enthuiastic and passionate love for music which even to this day still is just as strong, if not stronger.
Benjamin picked up and played his first guitar at the age of 10 which was only natural as his close family were all very musical. His older brother was a very strong influence regarding Ben’s early years learning the basics of guitar. As a teenager, Benjamin played in many bands with close friends and through his school years Benjamin spent his time locked in his room, listening to punk rock, hiphop, metal, acoustic, classical, funk, Jazz amongst other genres, developing his musical taste.
Benjamin studied Performing Arts at Peterborough Regional College for a year in 2007 when he was 17, this was the time when Ben decided he wanted to be an Acoustic artist, travel and see the world. Since then,8 years ago, Benjamin has been writing, developing and performing his own songs and perfecting his sound, releasing two EPs in 2009 titled ‘Dreams’ and later ‘Thenextnow’. Benjamin networked his music for years through Busking and Gigging constantly, making music his 9 to 5. The Journey for Benjamin has been hard, with many great times and many lessons learnt, both personally and profesionally .In 2012 Benjamin released his debut album, titled ‘Samadhi’ which gave birth to one of Ben’s well known songs ‘Old Man Jam’. It has only been in the past 3 years that Benjamin has developed a strong underground following across the UK and greater Europe, which is continuing to grow stronger.
Towards the end of 2014, Benjamin released a mini online digital album, titled ‘Seasons: The Sessions’which consists mainly of live songs and was followed by a single release in May 2015 of one of his new tracks called ‘Collipse’ which will be on his next album.
Benjamin writes songs about personal life events that everyone can relate to while also bringing political and spiritual views into his songs and delivers them with great power and emotion both lyrically and vocally along with a unique style of guitar playing.
Benjamin has had great worldwide internet success through platforms like youtube and UK internet radio stations which has given him the platform to perform across the UK and Europe.
Benjamin hopes to tour as much as he can and continue to work hard and do what he loves: to write music that will make himself and others happy and help through the hard times, and with great things in the pipelines for him which will be announced in the near future, it is only certain he will be doing exactly that.
WWW.BENJAMINCALLANAN.COM
YOUTUBE: BEN CALLANAN