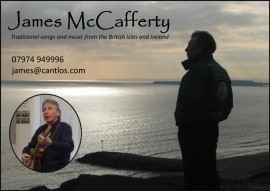 Songs and music with a Celtic flavour. Specialising in the almost-forgotten traditional folk songs of the British Isles and Ireland, James accompanies the songs on acoustic guitar, cittern and dulcimer, with additional dance tunes on the melodeon.
Request a Quote
Share this Page:
Profile Views: 1907
Report this profile

I specialise in the traditional songs and music of the British Isles and Ireland, and for most bookings I play acoustic guitar, cittern and melodeon, usually without amplification. Since many of the traditional songs in my repertoire are well-known "old favourites" (those lovely old songs remembered from primary school days), I usually invite the audience to join in the singing with me, and I can easily provide words if that would help.
If the event is relatively informal, I can surprise the audience by getting them to sing a couple of pieces with me in three or four-part harmony - yes, ev ... en those who've never sung before! And if the mood is right I sometimes throw in a couple of ballads (the old meaning of the word, as in stories told in song), either comic or gruesome....!

The Parting Glass
The Fields of Athenry
Scarborough Fair
Greensleeves
The Skye Boat Song
Ye Banks and Braes
The Water is Wide
The Sweet Nightingale
The Raggle-Taggle Gypsies
Wild Mountain Thyme
Over the Hills and Far Away
High Germany
The Star of the County Down
The Trees They Do Grow High
Martin Said to His Man
Twa Corbies
The January Man
The Banks of the Sweet Primroses
The Ash Grove
Dancing at Whitsun
Just as the Tide Was a-Flowing
The Shores of Avalon
Down in Yon Forest
The Marigold
How Can Ye Gang, Lassie?
Little Red Bird
The Massacre of Glencoe
Bread and ... Roses
Softly Come Morning
Adieu, Sweet Lovely Nancy
Serving Girl's Holiday
The Boar's Head Carol
Bread and Roses
The Chastity Belt (bawdy!)
Long Lankin (ballad)
The Rose
Plaisir d'Amour
Annie's Song
Lady Mary
Guardian Angel

James McCafferty first picked up a guitar in his teens and discovered a lifelong passion for the traditional folk music of the British Isles and Ireland, particularly the music of the Celtic heartlands. He taught himself to play the recorder and slowly built up a collection of reconstructed early instruments from the Medieval and Tudor periods, including cittern, dulcimer, crumhorn, cornamuse and psalteries. He founded the unaccompanied folk song group Solstice and the early music group Milady Clare's Musicke, with whom he recorded the albums Minstrels Gallerie and Pastymes. He danced with W ... inchester's international folk dance display team Woodfidley, played melodeon for King John's Morris of Southampton and founded the boys' morris dance team the Fryern Morris Minors. Under the banner of Early Music in Schools www.earlymusic.co.uk, he continues to take his demonstrations of early musical instruments to schools and community groups. He is the author of Live Recorder 1 – 3 www.liverecorder.co.uk, a series of three workbooks and CDs designed to teach basic musical literacy to complete beginners. James accompanies his singing on guitar, cittern, dulcimer and melodeon. 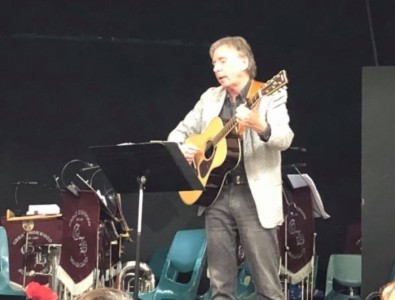 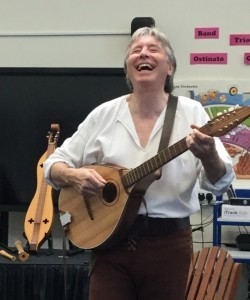 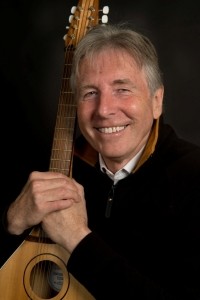 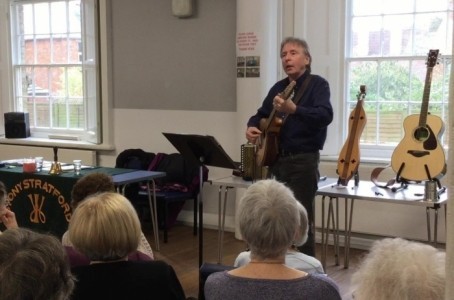 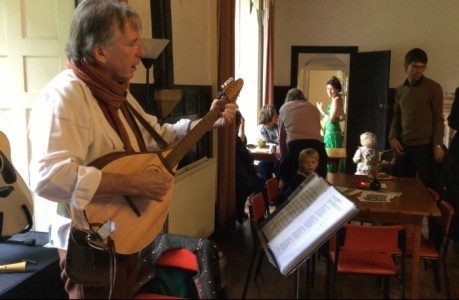 James McCafferty - Acoustic Guitarist / Vocalist - Milton Keynes, South East Event Location: Radcliffe Centre, Buckingham, UK Event Type: Concert 6th December 2018
Thank you for the lovely concert on Thursday evening – it was really enjoyable and I’m very glad I came. There were several carols I hadn’t heard before – from France mainly I think – and I particularly enjoyed meeting those, plus the instrumental pieces you introduced which added great variety. It’s good stuff and gets better every time I see it.
Reviewed by: Elaine Chisholm
James McCafferty - Acoustic Guitarist / Vocalist - Milton Keynes, South East Event Location: Ashbern, Buckinghamshire Event Type: Concert 25th April 2017
Well what a wonderful evening you gave us last night! Your programme of music and comment were very special and suited the audience so well. I had never heard, let alone seen, some of those instruments you played so beautifully, and your singing accompaniments were magical. So much talent displayed in your knowledge and obvious love of what you do.
Reviewed by: Susan Rand
James McCafferty - Acoustic Guitarist / Vocalist - Milton Keynes, South East Event Location: Judge's Lodgings, Aylesbury, Buckinghamshire Event Type: Corporate Event 25th November 2016
Thank you so much for coming to play for our members at the Reception at the Judges' Lodgings on Friday. We had lots of compliments about your performance.
Reviewed by: Jenny Street
James McCafferty - Acoustic Guitarist / Vocalist - Milton Keynes, South East Event Location: Stowe Landscape Gardens (National Trust) Event Type: Concert 31st August 2016
We loved having you here as part of our Capability Brown day and we’d love to have you involved in our Carols in the Courtyard this Christmas too. Your wonderful music really brings the historical setting here to life.
Reviewed by: Kathryn Lovell
James McCafferty - Acoustic Guitarist / Vocalist - Milton Keynes, South East Event Location: Clophill, Bedfordshire Event Type: Wedding Party 10th May 2014
We were absolutely thrilled with the Barn Dance James called for our wedding guests; it made the evening and got everybody up and enjoying themselves. James was professional and enthusiastic and made everybody feel at ease. He made the dancing such fun and really set the happy mood for the rest of the night. We thoroughly recommend James and his barn dances for any party; guests young and old will enjoy themselves!
Reviewed by: Amy Fisher