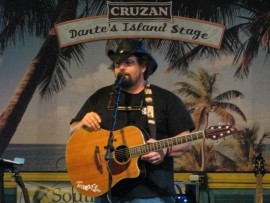 Singer/songwriter and cover artist, performing both original and cover songs in a wide range of genres, including but not limited to:
Rock, folk, country, Americana, reggae, Oldies, swing, jazz and instrumental.
I primarily play guitar and harmonica, and sing. I also play bass, Celtic bouzouki, mandolin and percussion.
I am equally at home in an intimate setting or onstage before thousands. I have opened and headlined as a solo act, in duos, trios and bands.

A partial sample of songs I perform can be found at http://www.johnfriday.com/Song_List.html

Just the Facts, Ma'am. . .
John Friday is a singer/songwriter originally from Maryland, now living in western North Carolina. John put full-time music aside for an Army career, after which he worked as an engineering technician and high school teacher.
An eclectic set of interests led John through the gamut of college majors, including biology; education; engineering; mathematics; business ("I'd always made fun of business majors, and suddenly I was one!"); computer science; classics (the most useful part of a classics degree is that you can say "Do you want fries with that?" in Latin!); ... and finally, one that combined many of John's interests, History. It only took twenty years to complete his baccalaureate, as little things like raising children and going to war kept him busy. John's love of History is readily evident, as he will discuss historical
events at the drop of a fin-topped hat.
John got his first guitar when he was 13, and for years was never far from it. He took it backpacking in the White Mountains of New Hampshire; while working on a crabber in Chesapeake Bay; even while skiing in Maine & Colorado. He still has that guitar, although his collection has grown somewhat over the years.
Moving back to the Mid-Atlantic region, John shortly realized that (1) he'd never really grown up and never would, and (2) his childhood dreams of making music were still powerful. Those dreams led to a move to Florida in 2004. John missed the changing seasons after a while (in Florida, the seasons are Hot, Summer, Surface-Of-The-Sun, and Snowbird), and in 2020 he moved to Asheville, NC.
He has released four CDs of mostly original music and is currently at work on a fifth.All four albums were nomiated for Trop Rock Music Awards.

John has played for a wide variety of events and special occasions. Since 2017, he has been the Music Director for Phins To The West, a Trop Rock festival held annually in Mesquite, NV. In 2019, he opened for Jimmy Buffett in Dublin, Ireland. He has performed at numerous music festivals and trop rock events, including the annual Meeting Of The Minds in Key West (the official Jimmy Buffett fan convention). He has performed in Europe, Canada, and Mexico as well as throughout the United States.

I became a full-time musician in 2008, after almost 30 years as an engineering technician and teacher. I was a founder/member of several bands during high school, but chose to enter the technical field and relegate music to a part-time job. I have performed in settings ranging from an intimate gathering for a few, to festivals drawing over 10K attendees. I have had gigs that went flawlessly, and gigs that provided opportunities to overcome adversity. Drawing on my Army experience, I have always been "mission first" and ensure that the show goes on without a hitch.
I tend to tell stories and ... jokes during a show, especially when introducing a song. However, I am equally adept at remaining "background music" in the appropriate setting.

I am a member of BMI performing tights organization.
I carry liability insurance.