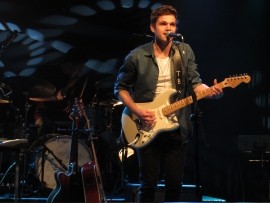 Singer/Songwriter who hit #1 in the unsigned charts in 2016. Can perform covers from Ed Sheeran to Elvis Presley, to suit the audience. Also can perform his own original music. He has performed for people such as Noel Gallagher, Sam Bailey, Bryan Adams and the Queen!
Request a Quote
Share this Page:
Profile Views: 647
Report this profile

Tom Bertram is a singer-songwriter who performs covers and original music. His last single 'World At My Feet' hit Number 1 in the unsigned charts worldwide and spent over three months there. Also his album 'Dig To Locate' spent six weeks at No. in the unsigned charts. Tom is a professional and well experienced performer. Performing for people such as Noel Gallagher, The Queen and the Twilight Movie to name a few.

Tom Bertram is a singer-songwriter from Portsmouth, UK. After suffering a heart attack, Tom had a pacemaker inserted at age 17. Tom has stated he suffered severe anxiety attacks after the attack and turned to music to help him cope with the anxiety. He then started to write his own music. His latest album ‘Dig To Locate’ was released on July 2nd 2015. The album is Tom’s first full LP, consisting of 10 tracks all co-written and produced with Tim Bradshaw (John Mayer / David Gray).
Three tracks from the album ‘Not Leaving Here’ ‘World At My Feet’ and ‘Burning Bridges’ have all ... had radio play on various stations including the BBC and Tom has been interviewed and has played live on both BBC and independent radio around the country
‘Burning Bridges’ was featured on The Mark Forrest Show as a BBC Introducing track, which was aired on 39 BBC Station across the UK, with an estimated 43.8million listeners.
The following day ‘Burning Bridges’ was one of the Top Songs on the UK iTunes and ‘Dig To Locate’ was No.1 in the Reverb Nation UK Charts. Tom's single from the album 'World At My Feet' went straight to No 1 in the Unsigned Top Charts and spent over two months there. Tom's fan base is growing daily, with the current numbers hitting over 200,000, 147,000 of them being on Twitter.