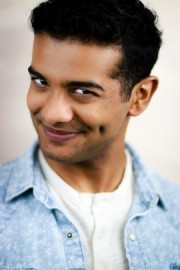 (no reviews)5.0
Country: United States
Based In: Los Angeles, California
From: $500

First generation Yemeni-American comedian based out of Los Angeles with TV appearances on Fox and ABC. In the beginning, Ahmed was your ideal Accountant but then was invited to an open mic and became hooked ever since.
Request a Quote
Share this Page:
Profile Views: 179
Report this profile

I perform stand up comedy. I talk about my background growing is a Yemeni-American Muslim in Texas introducing the audience who I am and what I am about. I connect with the audience with observational humor based on events that happened to me. My goal for every show is for everyone to have a good time. I do not have any racist, homophobic, or any other material that may come off as offensive.

I am first generation Yemeni-American. My father came to this country and worked very hard to put me through college just so I could throw it all away and become a comedian. I grew up in a small community in Dallas, Texas where I completed grades kindergarten through 12th at a private Islamic School. I graduated in 2011 with only 19 other kids, which was like the show “19 Kids and Counting” except with more diversity and less controversy. Being judged differently was something my family and I were accustomed to in Texas. Whether we were at Six Flags on a Sunday with all the churchgoers or ... visiting The Cheesecake Factory and having to request a corner table because my mother wears a Burka and we just want her to eat comfortably. My father always reminded us that no matter what we do, we are representing the people of Yemen and Muslims all over the world. My dad, Tarek Al-kadri, is the most genuine, charismatic, and funniest person I know. Truly, I owe all my accomplishments to him.
When I graduated from college in 2014, I immediately got a job as a Private Equity Accountant for Neuberger Berman, and I was miserable. But my life forever changed when I started my first improv class at Dallas Comedy House. Making choices in a scene that are supported no matter what is my greatest appreciation for the art. When I’m around improvisors, I feel completely comfortable and safe, especially in my favorite troupe called Sunglow. We started together two years ago and headlined every weekend at Dallas Comedy House while performing in festivals around the nation. This August I quit my job as an accountant and moved to L.A. to pursue a career in comedy.
Ultimately, I want to be a role model for young Muslims and Arab-Americans. When I read success stories of my idols, I always tell myself, “If they can do it, so can I!” Granted they’re much more talented and slightly better looking than me but hey, I believe in myself and my mother says I’m handsome all the time!

- Worked as improv instructor for a year and half.
- Host at Van Nuys Comedy Club
- Produced and wrote multiple sketch shows at Dallas and LA.
- Traveled all around at Comedy Festivals all around USA.

- City Of Arlington anniversary party
- Multiple Arabic weddings.
-Host Birthday roast parties (it was someones birthday party and I was the host, brought his friends and family up so they can roast him and I would open the show with my set and then close it out by roasting everyone)