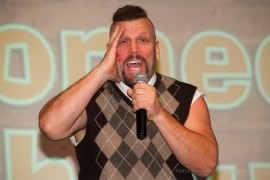 Aldo reaches back to his Italian roots and connects it with Today and woman and sex and relationships!!
Request a Quote
Share this Page:
Profile Views: 342
Report this profile

A fun filled act all about Italian up bringing and Life after the Italian family living as a single guy in LA! Touching on all life has to offer from Fantasy Football to working out to smoking pot! A wild fun crazy ride!!

ALDO JULIANO
Born with an Italian Speech Impediment,
(One arm shorter then the other, Just His Luck!)
He didn’t let it slow him down
After graduating from a Catholic High School and
going to the Third round of the Olympic Trials for Wrestling,
(That short arm must have been strong)
He packed his bags for “The Big Apple”
After Years of hard work, Tedious and Strenuous nights at Chippendales
Then classes at the ACTORS S ... TUDIO in the day
ALDO packed his bags again to move to LA
To pursue his Acting, COMEDY and Writing Career.
He has recently finished 2 Great films with Big name actors, finding his way as the “Tough, Mean, Bad Guy”
But Still keeping his Fun Funny thoughts on Life on the Comedy Stage
After Completing 2 Films Scripts, 1 Sitcom Script, 1 Hour Drama Script
and sold a Funny Reality Show
He constantly stays bizzy with also donating his time
Coaching a High School Wrestling Team
With a Strong Positive Attitude and Hard Work Ethic
Lots of Good things are still coming his way.
(310) 396-4050 - alwenentertainment@yahoo.com