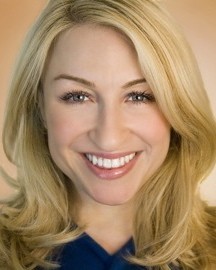 Oh, hi! I didn't see you there. Um, how long have you been watching me? Okay, that's a little weird, but I'll let it slide because you're visiting my profile!
Request a Quote
Share this Page:
Profile Views: 880
Report this profile

This is it, you've made it! Let me tell you about myself. I'm originally from the Bay Area in California. Actually, originally originally from Boston, but I was only there for the first year of my life. However, I'm sure I made a very good impression. I started performing at the age of 3 as a clown in a variety show while on vacation with my family at Club Med. Not to toot my own horn, but I'm fairly certain that's when I got my first standing ovation. Or it might have been at the end of the show and people were leaving anyway, but I prefer to think it was my first standing ovation.
Amy Alb ... ert is Delilah Dix
I then moved on to musical theater at the age of 9 and kept the party going in California until I moved to New York in 2003 to pursue the American Dream of being on Broadway! And I did! Waiting tables!. And I was amazing. However, I have had the pleasure of playing lots of wonderful roles in the musical theater world, such as Woman 1 in I Love You, You're Perfect, Now Change (which I've done twice and in the first regional production of) Grace in Annie, Woman in The Thing About Men, and lots of Italians in Tony and Tina's Wedding.
Nowadays you can catch me doing stand-up, improv and cabaret in clubs in New York and festivals all over the country. And, on occasion, you may see me in my one woman show, Delilah Dix and her Bag of Tricks (who I think is the person I will be in about 20 years) making her come back. When I'm not doing that, you can surely see me on my couch watching Intervention or Jon and Kate Plus 8, playing solitaire like a junkie chasing the dragon, and writing songs on her guitar about things she sees in her apartment (Cockroach Daddy Eats My Cheese will be topping the charts in no time!) I'm a Leo who enjoys long walks and shiny things. 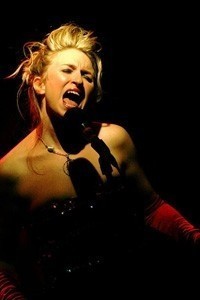 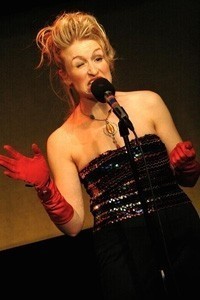 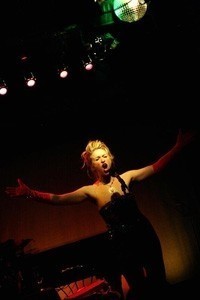