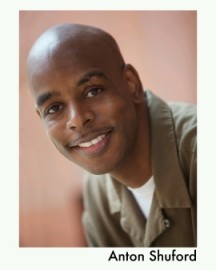 When contacting this member, please state that you are viewing their Entertainers Worldwide profile.
Request a Quote
Share this Page:
Profile Views: 418
Report this profile

This comedy show speaks on society, politics, political correctness, relationships, friendships, and strangers, the myth of right and wrong and the importance of being happy with yourself even as it upsets everyone else.

Anton is an author, writer, and comedian who showcases a very unique philosophy on stage that is honest, unapologetic and a defense lawyer's nightmare. He has been a finalist at many of the prestigious national comedy festivals in the US and is recognized as one the best rising acts in comedy. Anton has performed all over the world including Japan and Korea and can be seen at clubs and colleges across the country. He was also a huge hit at the Family reunion.
Comedy Bio
Hello my name is Anton Shuford. I am probably part genius and part insane. This has made my perspective on the American c ... ulture very broad. Having gone to a predominately Black university and then the U.S. navy then attending a predominately white university I have a uniquely pointed perspective on the America we live in. This background has helped me develop myself and my comedy to be very true to who I am, while being able to communicate that to my audience. Without compromising my truth I shall tell it as I see it. Comedy has always been my passion and once I began to step on stage I have found an inner peace and inner drive that college and the military was not able to provide for me. I am most comfortable, enjoyable, hateable,loveable, caring ,offensive, sarcastic when on stage. Without the stage there can be no rest for the Jedi within. It is where I am most at home. I have partcipated or won in numerous of the prestigeous comedy festival across the the country that has showcased my comedy alongside the very best in the comedy industry, such as The 2009 Boston comedy Festival, 2011 Great american Comedy Festival, and the 2011 Laughing Skull Comedy festival.

University's & Colleges in the US w/Kirkland entertainment. Also mainstream comedy clubs across the US.