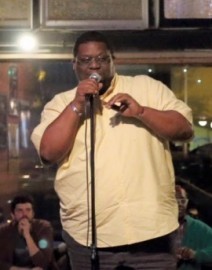 (no reviews)5.0
Country: United States
Based In: Little Rock, Arkansas
Performs: Nationwide
From: $300

I'm a stand up comedian that tell jokes about my experiences and my perspective of the things I see on a day to day basis.
: 479-422-XXXX Click here to reveal
full number

When contacting this member, please state that you are viewing their Entertainers Worldwide profile.
Request a Quote
Share this Page:
Profile Views: 139
Report this profile

My act is me telling jokes. I try to include the crowd when I can with out picking on them or talking down to them at all. I talk about real life situations and give my own twist. I talk about what I see and my perspective on it. I have seen a lot of things and been to a lot of places and every where I go I see something that I can use in comedy.

My name is Andre 'Big Dre' Price. I was born in Houma, LA. I lived in Chicago for my younger years and moved to Arkansas in high school and I have been here every since. I went to college at Henderson State University. My major was Communications and Mass Media. While at Henderson I taught a class in radio production and I am the Program Director at a radio station now.
I'm a stand up comedian that has been in comedy for 4 yrs. I started at the Loony Bin Comedy Club. Where I went through the ranks and learned how to move up in comedy. I have opened for Steve Brown, Doo Doo Brown, Pierre, T ... yler Craig, and a host of other comedians from around the country. I have done shows at Philander Smith College, Arkansas Baptist College, I have done shows at Covenant of Zion Cathedral Church, I have hosted events with the Sisters Living with Alopecia. I won 3rd place at the Loony Bin competition in 2013. I have been gone on the road to do shows in Tennessee, Oklahoma, Texas, Missouri, Indiana, Illinois, Kansas, Louisiana and all over the state of Arkansas.
I have always been in love with comedy and making people laugh. I am pursuing that to the fullest of my ability and beyond. I always have a good time no matter where I am called to do comedy, I will always respect the crowd and never, intentionally, do anything to be disrespectful to anyone that can hear my voice. I am a very humble comic with a true love for the art.
I have started a never ending journey to get the world to scream "What's Up Dre"