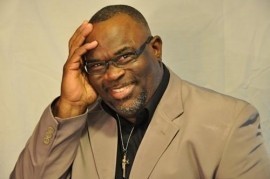 (1 Review)5.0
Country: United States
Based In: Pennsylvania
Performs: Worldwide
From: $600

Not oven enough will the comedy world give birth to a comedian that can genuinely make you see where this world headed. Ty Mac is that comedian ! Ty Mac brings humor, high-energy and quite wit to the stage. Ty leaves comedy audience wanting more for over 25 (+) years.
: 412-969-XXXX Click here to reveal
full number

When contacting this member, please state that you are viewing their Entertainers Worldwide profile.
Request a Quote
Share this Page:
Profile Views: 124
Report this profile


JANUARY 27TH 1991 WAS THE DAY I HEARD GOD TELL ME “STOP”!!
IF YOU’RE LIKE ME YOU KNOW OF THE BLESSINGS...I DON’T DO THAT ANYMORE, “JUST FOR TODAY”
ENTERTAINING MANY WITH STAND-UP COMEDY DURING MY ADDICTION WAS NO EASY TASK. THE HORROR’S OF ACTIVE ADDICTION HAD ME AT MY LOWEST POINT OF LIFE. THINGS HAD TO GET BETTER OR DEATH WOULD HAVE BEEN EASYER. SO GIVING UP THE HIGH COST OF LOW LIVING CAME TO ME OVER THE PHONE WHEN A FRIEND TOLD ME OF A MEETING WHERE “PEOPLE LIKE ME” MEET. I WENT YET I WAS VERY STAND-OFFISH. HEARING THE READINGS AND PEOPLE TALKING ABOU ... T A SOLUTION TO THEIR ACCTIVE OR NON-ACCTIVE ADDICTION ISSUES. I SEEN PEOPLE THAT I THOUGHT WERE DEAD FROM MY NEIGHORHOOD, BUT THEY WERE CLEAN FROM DRUGS FOR SOMETIME NOW. THE MAN AT THE PODIUM WAS TELLING MY ACCTIVE ADDICTION STORY “YET” HE SPOKE OF NOT USING DRUGS OR ALCOHOL FOR OVER 5 YEARS. I CONTINUED USING BUT WOULD ONLY GO TO THIS SATURDAY NA MEETING FOR ABOUT 2 MONTHS. ONE SATURDAY NIGHT AT THE MEETING A MAN CAME UP TO ME AND SAID “HELLO” MY NAME IS ROB, YOU NEED A SPONOR AND HERE’S MY NUMBER. I DID KEEP HIS NUMBER BUT DID CALL HIM FOR SOMETIME. I DID CALL HIM ONE NIGHT WHEN I WAS WANTED TO USE BUT I WAS TIRED OF USING, GETTING WHITE KEY TAGS. I WANTED A 30 DAY KEY TAG WITH HONESTY NOT THE DISHONEST TAGS I WOULD GET. ROB LISTENED TO ME FOR OVER AN HOUR, THEN HE TOLD ME TO MEET HIM AT “THE MORNING MEETING DOWNTOWN PITTSBURGH 951 PENN AVE. NO MORE FALSE CLEAN TIME KEYTAGS CAME FOR ME, I STARTED BELIEVEING SOMETHING WAS POSSIBLE. I EVEN WENT TO GOING TO MEETING IN MY NEIGHBORHOOD. OUR BOOKS SPEAK OF THOSE WHO HAVE STARTED RECOVERY MEETINGS IN THEIR HOMETOWNS, I’M BLESS TO HAVE DONE THIS ALSO. I RETURNED BACK TO STAN-UP COMEDY CLEAN, HAVE PROFORMED AT MANY CONVENTIONS AND RECOVERY VENUES AND REHAB PROGRAMS.GOD IS GREAT!!... CAMBLE SOUP IS GOOD. JUST FOR TODAY I’M LIVING IN THE SOLUTION AND NOT THE PROBLEM.

Ty Mac was born in Pittsburgh, Pa, The second oldest child of four children. Ty’s parents were hard working, GOD fearing people. Not the richest family "by money", but a good upbringing never the less. As a child, Ty always played pranks on friends and family members. Ty was educated in the public and catholic school systems. He was the king of class clowns no matter what type of school his parents placed him in. While in High School, He received average marks and played football all four years. Ty the first in his family to attend college at Central State University in Wilberforce, Ohio an ... d the first to drop out too. Personal problems back home. Ty continued to make people laugh in college and did some stand-up in talent shows. While working at their family business a close friend, who was already on the comedy circuit, would stop in and they would tell each other jokes.
This friend asked Ty to come with him one night to a comedy club and try out his jokes. "Ty refused". Months later the close friend asked if Ty would come to the club to see him perform, Ty agreed. Ty’s friend added Ty’s name to the amateur comic’s list and forced him on stage. Ty’s night was great; Ty came back the following week and bombed. His friend told Ty to keep coming out. As time went on Ty learned some tricks of the comedy trade. Stand up gigs started to come. Ty was inspired to start writing material to return to venues in which he had bombed. Ty also tried Lip Synching with his comedy routine and was a hit. As the years went on, Ty Mac continued to better himself not only as a professional comedian, but also in acting. When asked why he does this line of comedy work, Ty replied, "I feel like GOD gives me the talent and I wouldn’t waste it again. During the early 80’s my addiction to drugs and alcohol robbed me of the gift which GOD gave me, but by January 1991 Ty got clean in recovery. The gift of making people laugh comes from God and if I didn’t share it with people then why was I give a second change. Ty has performed for many benefits for organizations. Ty Mac has recorded CD’s and 3 DVD’s. Ty continues to work on TV and commercials. He also has media/press article coverage with Pittsburgh’s” The Soul Pitt Magazine”, Pittsburgh’s The City Paper “CP” and Afro-American magazine from Cleveland Ohio.
Not oven enough doses the comedy world give birth to a comedian that can genuinely make you see and understand where this world headed. Ty Mac is that comedian, brings his enter-city humor, high-energy and quite wit to the stage. Ty continues to leave comedy audience laughing during and hours after his performance. Now with over 25 years in the business, with TV and movie credits to boot. Ty Mac has worked with many BIG name comedians. Ty has DVD’s and CD to his credit. Sit back and enjoy the comedy of Comedian Ty Mac 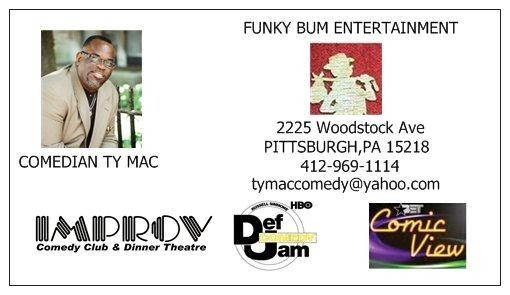 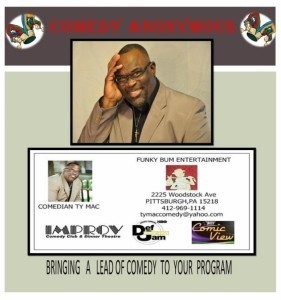