Very experienced comedian, makes it looked effortless. Unfazed by the toughest of the audiences.
Request a Quote
Share this Page:
Profile Views: 964
Report this profile

This distinctive and enjoyable comedian is the king of quick-witted banter! Dave has a tendency to engage with the crowd so if you are on the front row, prepare yourself! However, whether you are on the front or back row, a good time is certain to be had – expect great warmth, perfect style and impressive content. 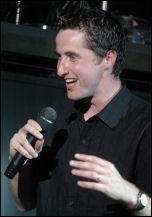 Dave has 13 years experience performing stand-up comedy around the UK and abroad. In that time, he has also appeared on ITV, been a regular guest on XFM, Radio Manchester/Lancashire, regular columnist for his local paper, writer for Jason Manford and Dave Spikey and now features on the Blackpool Comedy Carpet amongst the most popular comics in British Comedy history. Dave has also been a regular performer over the past 6 years at some of the biggest music festivals in the UK such as V Fest, Leeds/Reading, Download etc.