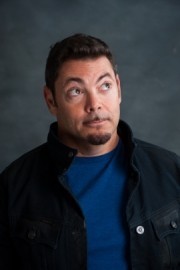 Characters + impressions permeate the standup comedy of Hersh Rephun, who's appeared across the country in clubs such as The Comedy Store, The Ice House & StandUp NY. @3xDailyComedy on IGTV shows the scope of his talent. Available for virtual shows, greetings & more!
Request a Quote
Share this Page:
Profile Views: 681
Report this profile

Characters, impressions, dialects and more permeate the standup comedy of Hersh Rephun. Hersh has appeared across the country in clubs such as venues such as The Comedy Store, StandUp NY, Comic Strip, Caroline´s and The Ice House's Stage 2, where he headlined. In addition to work in Film & Television, Hersh has given voice to numerous characters and brands, and written several cult films featuring Bruce Campbell, space ships and bikinis. Hersh wrote and starred in the Standup Comedy show SMITHEREENS, at the iconic Pig 'N Whistle in Hollywood, CA. He currently hosts @3xDailyComedy on IGTV, an ... d stars in YT's "The Adventures of Inspector Gerard Rouge," shot entirely on lockdown, in which he plays multiple characters.

Someone recently told me that I’m 2/3 Peter Pan, 1/3 responsible adult. I’m no math genius, but what about the other third? Anyway, from the time I was an actual child I’ve been building an arsenal of characters, impressions and stories that help me get through life, work through my mother issues, and, as a byproduct, entertain others.
My struggles have played out for the amusement of people across the country in legendary venues such as The Comedy Store, StandUp NY, Comic Strip, Flappers, Caroline´s and The Ice House’s Stage 2, where I headlined. By the way, in talking about the p ... laces I play, I tend to use words like legendary and iconic (since I’m neither, yet). So get used to it.
In addition to work in Film & Television, I’ve voiced numerous characters for brands and weirdos who like to hear voices but can’t do them on their own. I’ve also written several cult films featuring spaceships and bikinis.
I did something even God has not done: created a “A Woman with 3 Nuts”. It’s a very strange and entertaining musical stand-up comedy show that plays regularly at the iconic Pig ‘N Whistle in Hollywood. My costar in the show is the beautiful and funny Tiffany King. A uniquely gifted musician and storyteller named Brian Francis helps take this thing to another level.
I don’t include personal information in my bio, because as a comedian I talk enough about that stuff onstage. If you’re interested in me as a person, ask one of my wives or any number of my kids. 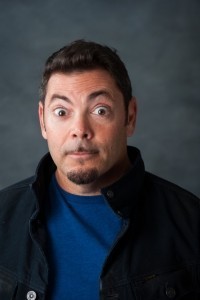 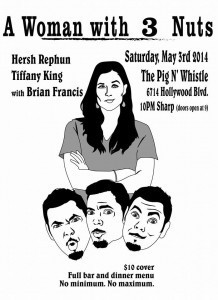 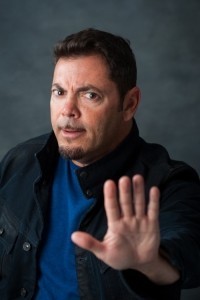 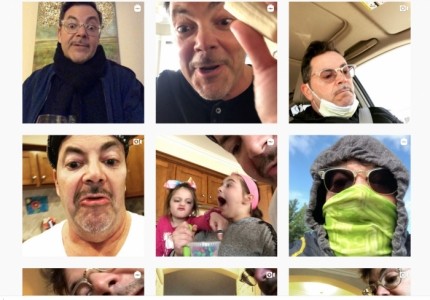 Hersh Rephun - Adult Stand Up Comedian - Iowa City, Iowa Event Location: Saba Sushi, Los Angeles Event Type: Private Show 7th February 2018
“I’ve never witnessed a performer like Hersh Rephun – funny, off the cuff, in-character, and all with a razor sharp wit. What a show!”
Reviewed by: Jordan Brady,
Hersh Rephun - Adult Stand Up Comedian - Iowa City, Iowa Event Location: Manatawny Still Works, Pottstown, PA, USA Event Type: Corporate Concert
“When we first opened our tasting room at the distillery, we wanted to offer our customers a unique atmosphere and provide a reason to come out and see us – other than our amazing spirits of course. I can tell you, Hersh Rephun definitely did that this weekend with his “3 Bitches Ain’t Enough” show. We’ve had so many people stop by, call, or email us and ask when he’s coming back. His brand of comedy is something you won’t forget, I literally start laughing when I think of some of the stuff he said.” Randy McKinley VP Sales + Marketing, Manatawny Still Works, 3 Bitches Wheat Vodka
Reviewed by: Randy McKinley

Via footwear marketing firms Propeller 5 and SLAM (Sportie LA Media), Hersh has brought his knack for original characters to numerous brands. He has written, produced and appeared in videos for Reebok, Fila, PF Flyers, LA Gear and more. For BEARPAW, Hersh starred as British Fashion Correspondent Simon Rawley-Wells in the Web series "BEARPAWtv".