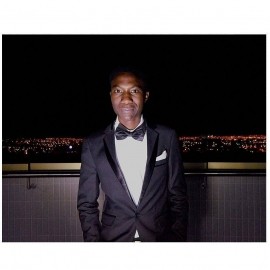 1
(no reviews)5.0
Country: Namibia
Based In: Namibia (Windhoek), Namibia
Performs: Worldwide
From: Please contact for a quote

My kind of comedy is derived from personal experience and social commentary and just about everything everybody can relate to.
: +26481402XXXX Click here to reveal
full number

The name KriswithaK is not new in the comedy industry. The comedian, whose real name is Kristian Hafunda Yambeulu, is one of the youngest local comedians who have impressed many comedy lovers at different occasions.
KriswithaK’s artistic flair received recognition when he won the Best Newcomer of the Year at the eighth Celebrity Shakedown Awards ceremonies at the Warehouse Theatre last year.
He is also the winner of the ‘Namibia Has Talent Award’ in comedy, that was hosted by the Franco-Namibia Cultural Culture (FNCC) in July.
Many know KriswithaK as a comedian who headlines shows ... for big name stage comedians, especially in the Free Your Mind space.
His first appearance in the comedy set was last year when he performed at a packed Hilton Hotel Kalabar’s Comedy in the House event for five minutes.
“I was very nervous because I have never performed comedy in front of white people, but I nailed it and guests loved my jokes,” says Kris.
He adds that ever since his debut on the stage he never showed any intention of stopping and continued writing and rehearsing more jokes.
Last year Kris also took part in the Free Your Mind annual comedy competition, Last Comic Standing, and finished in second place after eliminating six other contenders.
Winning the Best Newcomer Comic of The Year with Free Your Mind at the end of last year, Kris was also chosen to be part of the SADC comic tour, where he performed in Cape Town and Gaansbaai before performing in Mozambique, at a cultural festival hosted by the African Catwalkers.
Born 20 years ago in Windhoek, Kris grew up in Okong and says his background played a major role in his life.
“By then I never thought [making] jokes could be a talent. I loved cracking jokes, sometimes even unconsciously. But when I came to study at the university, my fellow drama students would encourage me to try “stand-up comedy” as I was always funny,” says Kris.
It was then that he was introduced to the founders of Free Your Mind, Slick The Dick and Chicken Kaxuxwena, who gave him a green light.
This month, Kris also got an opportunity to perform at the Disability Awareness Campaign. “I also got a call to host the ETMP book launch end of this month at the National Memorial Museum Restaurant (NMMS), and I will be opening up the show for Courage the Comedian’s show on November 11,” he says.
“So this whole comedy thing is really working out for me and mostly my jokes are from experience and exaggeration,” says Kris.
Kris also joined other winners of the Namibia Has Talent contest at FNCC. He described the event as a great opportunity for people to become aware of his potential. “I was really excited to be part of the show, because there were different activities, such as comedy, music and dancing, making the event even more attractive and special,” he says.
Kris creates jokes from experience; from what he imagines could happen if he was in a certain situation. Some of his jokes tell parents why they should beat their children and why fighting with Hitman Moses is a bad idea.
“Of all the performances that I have done, I have observed how people react to jokes. They look like they do not have problems, or things to worry about, laughing without anything to worry, which is an amazing to me. That proves that laughter really is the best medicine.”

Share this Page:
Click here to view all of our Adult Stand Up Comedians on Entertainers Worldwide
Browse all Entertainment Hire options!