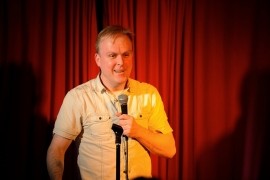 Obie is a Scottish comedy legend who is highly regarded as one of the most naturally talented comedians on the circuit today. He will take you on a surreal journey filled with laughter. He has been performing stand up for 18 years and regularly performs at clubs across
: 0790284XXXX Click here to reveal
full number

Obie has been on the circuit for 18 years. He regularly headlines comedy clubs all over Scotland. He has also been performing solo shows in festivals from Edinburgh to Melbourne for 12 years. He is regarded as one of the most natural stand ups on the Scottish circuit with great material and delivery. He also had a great ability to go off on a tangent and make up a whole new set on the spot when working with the audience. As ell as his off the wall stand up he has an amazing trained memory which he combines with his comedy to pull off an improvised comedy routine from memorising up to 200 rando ... m words from audience suggestions.

Obie. - Adult Stand Up Comedian - North Lanarkshire, Scotland Event Location: Glasgow Event Type: State Bar comedy club. 10th June 2015
Obie opened at the State last night and Christ he was good. Flair, relaxed confidence tinged with just the right amount of mania, and some kick-a**e material I hadn’t heard before. Got the room rocking from the off. Played. “ Neil Mc Farline.
Reviewed by: Neil Mc Farline
Obie. - Adult Stand Up Comedian - North Lanarkshire, Scotland Event Location: Leicester Event Type: Leicester comedy festival 28th June 2014
Obie was by far the funnest guy i saw in the entire two weeks some comics are good writers some are good performers some have a natural ability this guy has it all… before the show even started he had the mic in his hand like he wanted to splurge out a million and one funny things to say picking up on people that had just walked in, observations about awkward audience members in the previous show were solid gold and funnier than some comics best gags, nothing overly complicated and too taxing id recommend him to a wide variety of my friends and will defiantly see him again when i get the chance 5 *****
Reviewed by: Leicester comedy festival.
Obie. - Adult Stand Up Comedian - North Lanarkshire, Scotland Event Location: ESpionager Edinburgh. Event Type: Edinburgh festival 18th August 2013
The educational theme then continued as I attended Scottish comedian John Obrien’s (Obie’s) show about how to improve your memory. (Obie: A comedian’s Guide to Improving your Memory 4****). I met Obie on the comedy circuit a couple of years ago and I have found his work very interesting. Obie runs workshops in stand-up comedy and memory training and I have attended both and learned a great deal from them. I was intrigued as to how he would merge his comedy with a memory workshop in just an hour. Especially while stating that the audience would “improve their memory”. Could he manage this while also making the audience laugh? Yes – he did. The thing that I admired most about this set, was the excellent and expert structure of the hour. So much stand-up I have seen is haphazard or lacking in direction, but Obie with this show had a tight and perfectly crafted structure while still allowing for spontaneity, improvisation, audience banter and responding to anyone that happened ... to call anything out.The international audience that the Fringe brings is no mean feat for anyone with a thick accent, never mind a proper Glaswegian. It was quite amusing watching the deep concentration from an Israeli couple as they tried to follow Obie’s Glasgow vernacular. But as the show played out the man in the couple chipped in a good few times so he had managed to follow which was impressive in itself. Within this hour Obie managed to create a great rapport with the crowd, show off his own memory skills which were very impressive, shared how he did this with the audience and allowed them to try out their new skills. None of this dragged at all and it all flowed brilliantly with a neatly tied and timed ending. The audience were delighted with the show and one guy who had been grinning ear to ear the whole way through the performance happily slapped a tenner in the bucket at the end while raving about the hour to his girlfriend. This routine was laugh out loud funny, wonderfully packaged, included much audience interaction and delivered on the claim that the audience would learn something along the way. Check it out if you like Glasgow banter, improv, Derren Brown or just fancy a guaranteed good hour on the Free Fringe.
Reviewed by: Weird Fringe.

1 years on the circuit headlining shows all over Scotland and writing and performing solo shows for the past 12 years at comedy festivals and beyond.