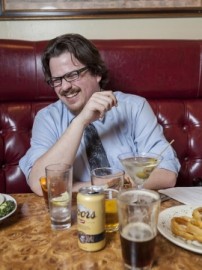 (no reviews)5.0
Country: United States
Based In: Georgia
Performs: Nationwide
From: $50

Phil Keeling is a comedian based out of Savannah, Georgia. His combination of manic intellectualism and vulgarity has caused comedian/producer Lee Keeler to call him "a combination of Oscar Wilde and Larry Flynt".
Request a Quote
Share this Page:
Profile Views: 626
Report this profile

Phil was born in Frankfurt, West Germany, shortly before the fall of the Berlin Wall. His experience has left him with a hunger for life and humor, and an intense distrust of walls.
Keeling began smashing heads with the laughter hammer in 2009, and was an original piece of an unnamed collective of comedians that forged what is now the Savannah comedy scene.
Since then he has been seen at the Hollywood Improv, the North Carolina Comedy Arts Festival, and the Kovalchick Convention center--not to mention constant shows throughout the South. He has shared stages with the likes of Neil Ha ... mburger, Neal Brennan, and Tom Rhodes.
"Conquistadork", Phil's first comedy album, was released in April of 2012. Gabriel Ricard of Drunk Monkeys had this to say about Keeling's freshman CD:
"Keeling lays into his material and delivery with the confidence and skill of a seasoned comedy veteran. He knows his style, knows exactly what to say, what his audience is thinking and how to roll all of that into one funny piece of material after another (I think I listened to Stripper Small Talk three or four times in a row on the initial listen—It’s just that damn funny)."
Phil Keeling is available for clubs, bars, casinos, mud wrestling semi-finals, high school proms, back alley fight clubs, and funerals. His favorite beetle is the Bombardier Beetle, who can fire a noxious, explosive spray to ward off predators. His favorite Beatle is George Harrison, who cannot. 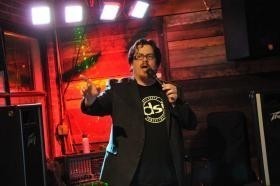 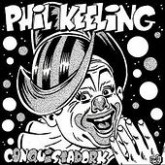