You are contacting Rab (the big Glaswegian) Mulheron 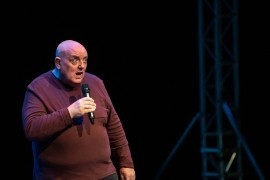 2
(4 Reviews)5.0
Country: United Kingdom
Based In: Inverness, Scotland
From: Contact

I specialise in Adult Comedy and love doing Sportsman's Dinners and Sporting Events and also Charity Fundraising Nights but would consider any event requiring Adult Comedy. Recently appeared at The Eden Court Theatre Comedy Show to a SELL OUT Audience.
Request a Quote
Share this Page:
Profile Views: 793
Need Help?
✖