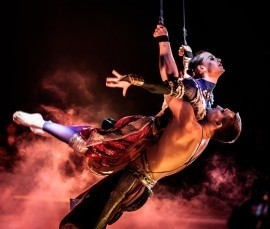 Straps act India is innovative. It has author’a style, which separate this act from other aerial straps. Music mad in studio with a special Indian music instrument. Temp is dinamic, technique is spectacular, costume and ambience all together make entire story about two Indian Gods impressive and very emotional.

Before the formation of the duo, Yulia was born and raised in a family of circus trapeze artists. Alexey comes from gymnastics, with 15 years working in hazardous act - teeterboards. After a series of the most severe injuries occurred in the Canadian circus Du Soleil, Alexey created solo straps act and went back to Russia, where he met Yulia while working in one show. Now thay are married . Yulia was working swinging solo trapeze. Falling in love with each other and determined to be together at all times, Alexey and Yulia continue touring together. In addition to solo numbers young couple rel ... eased their first duo on the straps. Some time later, Alexey and Yulia are introduced to the create director Ruslan Ganeeva and receive the offer of cooperation. Ruslan for 10 months (a period in which the artists had to give up foreign tour) puts three of his director's statement for a straps duo, airial ring and pole. These performances are a huge success not only in Russia but also in Europe and America. Each act is distinguished by its unusual style and storyline. The colorful costumes and studio music written specifically for these rooms, as well as the dynamism and complexity of execution tricks all this characterizes the personality and professionalism of these numbers. In late 2013 Alexey and Yulia decided move to Las Vegas where a lot of entertainments and shows. After couple weeks searching for contracts Variete show V did offer to Alexey and Yulia for their duo straps. After 4 months of performing there the Cirque Du Soleil noticed a talented couple and at the same time offered a contract in 2 different shows Mystere and O with a solo acts. Alexey and Yulia did accept these offers and worked there 3 years. And now since their contracts had finish pair reunited again for further touring together. 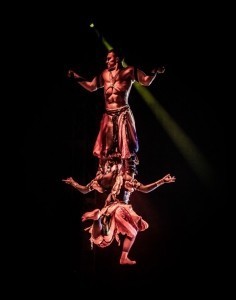 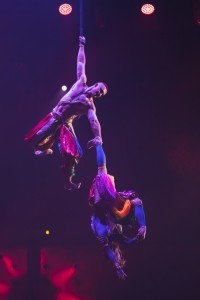 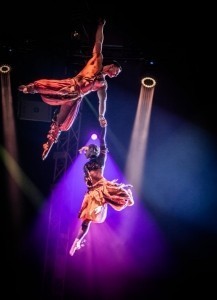 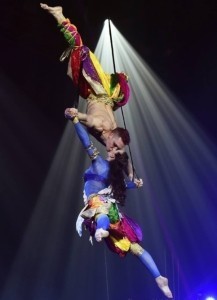 Most events are suitable but advance request is required