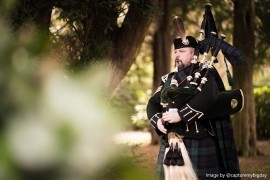 I have been playing the bagpipes for over 30 years. I have had the privilege to travel all over the world and play at many events and functions. I take great pride in the standard of my turnout and playing and believe that I must always deliver my absolute best.
: 0788735XXXX Click here to reveal
full number

When contacting this member, please state that you are viewing their Entertainers Worldwide profile.
Request a Quote
Share this Page:
Profile Views: 274
Report this profile

My experiences from the age of 9 allows me to confidently provide a professional service to any event type. Having experienced this high level of performance, I am able to offer a professional service from the standard of turn out to quality of playing for your event. I pride myself on providing a quality performance every time, I have a number of tartans in both full dress and less formal options. I am confident that whatever the occasion I can provide a performance to suit.
I am able to offer advice and assistance to event organisers where required and will fully support the planners at e ... very point throughout the planning and delivery of the event.
In addition to the various tartans I have, I also have a range of uniforms to complement any occasion, so you can be assured that my performance at your event can be tailored to the smallest detail.
I can also offer a composition service. If you have a special guest you would like to be honoured in unique way, I can write and play a specially commissioned tune that can be framed and presented by the event organisers.

The following is a selection of my repertior, I do have other tunes that may be unfamiliar to non piping people. If you don't see your
favourite, please get in touch, I do have an extensive library and can usually source and learn most bagpipe tunes.
Amazing Grace
Highland Cathedral
Slow airs/songs
Caledonia
Cock of the North
Danny boy
Going Home
Happy Birthday
Hector the Hero
Maries Wedding
Mull of Kintyre
My Home
Scottish soldier
The Cradle song
The Dark Isle
The Flower of Scotland
The Leaving of Liverpool
The Mingualy boat song
The Mist covered mountains
The Sky b ... oat song
These are my mountains
We're no awa tae bide awa
Laments
Flowers of the Forrest
Sleep Dearie Sleep
Hymns
Abide with me
Oft the Stilly Night
Marches
Bonnie Dundee
Donald MacLean of Lewis
Farewell to the Creeks
Highland laddie
Jeannie Mauchline
King George the V's Army
Liberton pipe band
Lord Lovat's lament
Murdo's Wedding
Scotland the Brave
The 25th KOSB's farewell to Meerut
The Atholl Highlanders
The Barren Rocks of Aden
The Bathgate Highland games
The Battle of the Somme
The Battle of Waterloo
The Black bear
The Bonnie Lass of Fyvie
The Crags of tumble down mountain
The Green Hills of Tyrol
The Heights of Dargai
The Road to the Isles
The Rose of Allendale
The Roses of Prince Charlie
The Rowan Tree
The Steam boat
When the Battle's O'er
Ye jacobites by name
Burns
Auld Lang Syne
A Man's a man for a that
My Love she's but a Lassie yet
Corn rigs are bonnie
Ye Banks and Braes
Will ye no come back again
Ae fond Kiss

Where it all began!
I had wanted to learn the bagpipes from the age of 6 and finally got to start learning the bagpipes at 9 years old with a local band. It was here that I was taught the basics and developed my passion for the Great Highland Bagpipe. I spent many happy years with this band learning my craft and travelling around the country to play with the band. At the age of 17, I decided to join the army and I became a member of the world famous pipes and drums of the 1st Battalion The Black Watch.
What came next?
During my time in the army I was lucky enough to travel all over the ... world playing with the band as well doing my day job as a soldier. I was extremely lucky to have chosen one of the army's premier pipe bands to serve with and received world class instruction from them which further developed my skills and abilities. As an army piper I was chosen to take part in many high profile events, the highlights of those events would be playing for the Royal family and various other international heads of state at official functions, the Edinburgh military tattoo, North American tour and the hand over of Hong Kong to name but a few. During my time as an Army piper I passed the class 1 pipers course which was a pre requisite for being put forward for the army Pipe Majors course. Being an army piper in one of the worlds premier professional pipe bands gave me an excellent grounding in performing at many types of events and I believe my experience allows me to provide my clients with an unrivalled service.
After the army.
After leaving the army, I returned to the band that had taught me and very soon after I was asked to be their pipe major. The band had suffered over the years and was not in a healthy state, we set to work to rebuild the band. Over the next few years I started to teach new pipers and the membership grew steadily and we managed to get the band back on the competition field. I have played at most of the official major championships, including the World pipe band championships, the European championships and the British championships and was keen to take my band to these events, we managed to attend some of the major championships as well as many local competitions and we were able to pick up a prize or two along the way. As well as playing in competition with the band, I also attended local solo piping competitions and was lucky enough to have held the North West England solo piping championship. After 8 years with my childhood band, I decided a change was required and was asked to teach a local cadet band, some of my cadets went on to play at high profile events themselves and some even followed in my footsteps to take up a piping career in the armed forces. Shortly after getting involved with the cadets I was invited to be Pipe Major of another well known local band, although I am no longer the Pipe Major of that band, I still take an active part in the teaching and direction of the band. 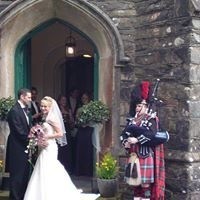 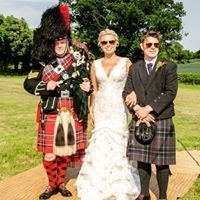 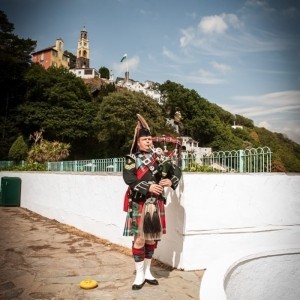 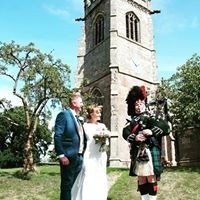 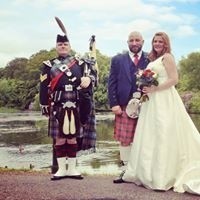 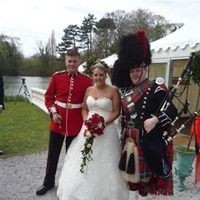 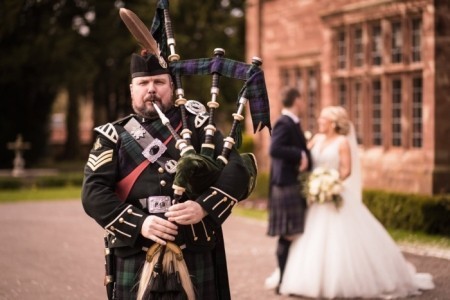 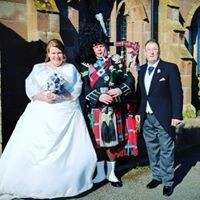 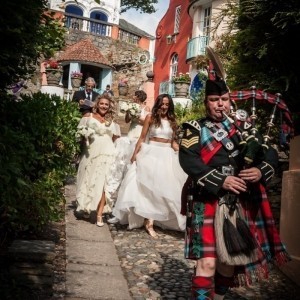 I have worked with many professional clients such as Wedding planners and Funeral directors. I have also been employed on a regular annual basis by the band of the Yorkshire Regiment to support their annual festival of Remembrance as well as being the national piper for the Aden Veterans Association.
I have worked extensively with many military organisations such as the Sgt's and WO's mess of number 1 Working Dog regiment, Officers mess of RAF Shawbury and both the Sgt's and WO's mess and Officers mess of Fulwood Barracks, Preston.