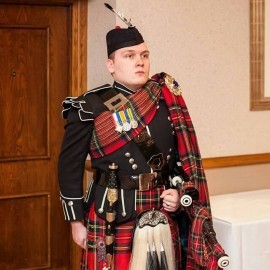 BCS Bagpiping brings traditional Scottish entertainment to the masses.
Originally from Edinburgh, Brodie Savage is a highly experienced professional bagpiper currently based in Warrington, Cheshire. As well as piping for entertainment, Brodie regularly takes part in piping competitions both solo and as a member of numerous pipe bands, picking up numerous prizes for his solo playing.
Brodie’s experience includes previous work alongside the world famous Royal Scots Dragoon Guards, of 'Amazing Grace' fame and through this work has taken part in large public events including The Royal Edi ... nburgh Military Tattoo, Basel Tattoo and Hong Kong International Tattoo as well as playing for members of the Royal Family including the Prince of Wales, Duchess of Cornwall and Prince Michael of Kent. In playing with the most famous Pipes and Drums in the world, Brodie has played with some world class bands including the bands of the Grenadier, Coldstream and Scots Guards, The Massed Bands of HM Royal Marines, Switzerland's 'Top Secret' Drum Corps as well as pipes and drums from the Scots Guards, Royal Air Force Royal Ghurka Rifles, Royal Highland Fusiliers, Royal Scots Borderers and the South African Irish Regiment. Brodie has also donated his services to a number of charities including Marie Curie Cancer Care and Help For Heroes.
Brodie will happily attend events throughout the UK, regularly supplying 5 star hotels and castles, as well as entertainment agencies and private clients. He is also more than happy to pack his pipes and travel a little further to make your event that little bit more special.