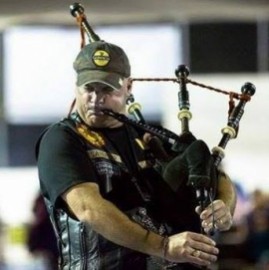 Rock and Roll Bagpiper. MarineSandpiper incorporates the bagpipes into classic rock, modern pop, and even jazz. Covering such artists as AC/DC, Lady Gaga, Muse, Journey and many others, he treats the pipes as if they were the lead electric guitar in a rock band.
: 760362XXXX Click here to reveal
full number

When contacting this member, please state that you are viewing their Entertainers Worldwide profile.
Request a Quote
Share this Page:
Profile Views: 869
Report this profile

A professional bagpiper for over 20 years, Joel wanted to do something a little different than the traditional "Scotland the Brave" in a parade or "Amazing Grace" at a funeral (although he still does those from time to time). While searching "rock and roll bagpipes" on YouTube, he came across AC/DC's "Long Way to the Top" video and that sparked his new journey of taking the Great Highland Bagpipes out of their pigeonhole and putting them into mainstream music. Combining background tracks and vocals, he creates a high energy, one-man-show that leaves crowds scratching their heads saying, "I did ... n't know you could do that with the bagpipes!"
Covering such artists as AC/DC, Lady Gaga, Journey, Muse, Evanescence, and many others, he has entertained audiences at highland games, city festivals, private and corporate parties, social events, anti-social events!
Most recently, he has added an new facet to his show by utilizing the Scottish Small Pipes - a quieter, more mellower sounding instrument that is designed to be performed indoors - perfect for more intimate settings where the Great Highland Bagpipe may be overpowering.

Joel spent 20 years as a US Marine Corps musician (tuba, conductor). He retired from active duty in 2012. As a young, impressionable Lance Corporal, his first road trip with a Marine Band sent him to Pleasanton, California where they were the only brass band amongst the 1000+ pipers. Well, after a weekend of "dudes wearing skirts chucking telephone poles", it took over two weeks for the drones of the pipes to get out of his head. It was at that moment he knew he had to learn how to play them! He has been honing his craft during his entire military career having had the rare opportunity to play ... his pipes across Europe, Kosovo, and even in Ramadi, Iraq where he earned his stage name by playing in "The Great Sand Box". It has now been over 20 years from that first weekend and he's only getting better! 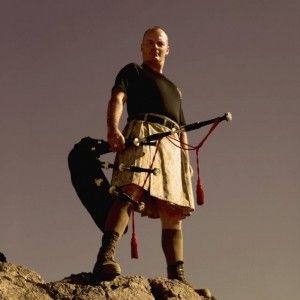 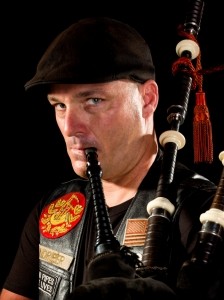 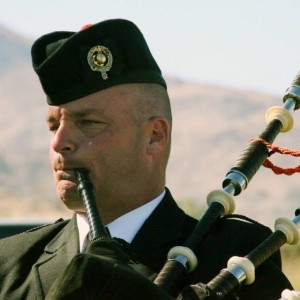 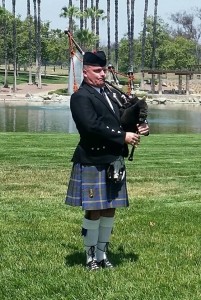 Insured for Public Liability through RLI.