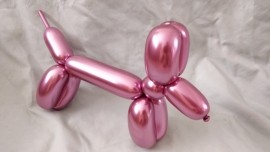 Balloon Modeller with many years of experience. Lord Geoffrey started balloon modelling in the USA and became Walt Disney World's balloon modeller. Now you can enjoy the many creation at your event or party. You should have Lord Geoffrey The Balloon Guy at your do.
: 0794163XXXX Click here to reveal
full number

When contacting this member, please state that you are viewing their Entertainers Worldwide profile.
Request a Quote
Share this Page:
Profile Views: 1025
Report this profile

As a skilled balloon modeller, Lord Geoffrey brings charm, enthusiasm, fun and commitment to every event. He has been entertaining thousand of people all over the UK , across Europe and the USA with his Balloon Modelling skills. He's a regular at London film premieres, on TV, at exhibitions and Fun days. He can also be seen in the film Johnny English.
Why not join the many people that have enjoyed having Lord Geoffrey "The Balloon Guy" balloon modelling their event. 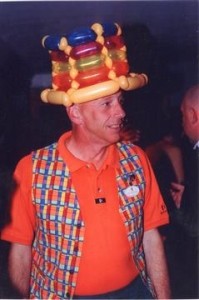 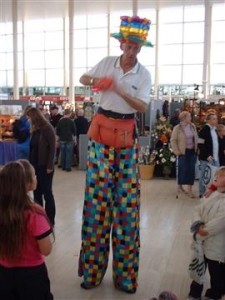 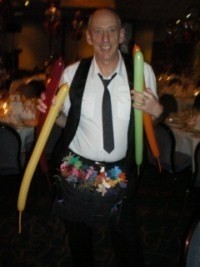 Lord Geoffrey started his career as a child actor appearing in films & television programs as an extra and on the stage in Scout Gang Shows and local rep. He then moved on to become a popular Disc Jockey in clubs and pubs as well as being hired for private parties and weddings in and around the south of England.
Since developing his skills as a balloon sculptor beyond the basic Dog and Giraffe he has been entertaining adults and children full time with balloon modelling as well as Disc Jockeying, both in the UK and the USA.
On moving to Florida 1994. Lord Geoffrey was contracted for a ... two month special promotion sponsored by M&M Mars, Coca Cola and Eagle snacks in and around the Philadelphia area. With personal appearances at a variety of venues which included, nightclubs, school assemblies, stores and also media appearances on radio and the local ABC TV show Captain Noah.
March 1995. Lord Geoffrey returned to the UK where he performed as a DJ in a number of pubs and clubs around the south east of England and a number of children's parties with his balloon modelling.
April 1996. Lord Geoffrey returned to Florida. The summer season of 1996 saw Lord Geoffrey entertaining guests four nights a week as The Balloon Guy for Disney Kids Night Out program at Walt Disney Worlds Village Market Place and every Sunday evening as a DJ at the UK pavilion in EPCOT with all the 60's and 70's music of the British Invasion.
July of 1996 Lord Geoffrey started performing five days a week at EPCOT. Initially for a 20 week run.
In November of ?96 the run was extended and after a further two and a half years at EPCOT, Lord Geoffrey decided it was time to return to the UK. In September of ?96 Lord Geoffrey started entertaining guests at the new Disney Boardwalk one night a week. He proved to be so popular with the guests that he began entertaining there four nights a week from November through April of ?97. While working in Florida, Lord Geoffrey has performed in front of thousands of people at Walt Disney World, Corporate Exhibitions & Conventions and appeared on national television as well as private shows for such stars as; Michael Jackson, Princess Stephanie of Monaco, Robin Williams, Kevin Bacon and their families.
In November 1998 Lord Geoffrey returned to the UK. Where he was busy, working the '98 Christmas season at the Gatwick Manor and the Forte Posthouse hotels.
1999 started with a number of corporate Gala dinners. Notably for British Telecom, The Royal Mail and The DMA. In March of that year Lord Geoffrey was at Wembley, entertaining visitors at The International Direct Marketing Fair. May he was on the road with the Prudential Prue Tour ?99, performing around the UK from London to Scotland. In June The Royal Academy of Art in London had Lord Geoffrey entertaining at the Academies Gala Dinner. And at Ascot, one of his amazing Top hat creations became the Center of attention at Royal Ascot Ladies Day, appearing in the national press and on TV.
Throughout the year he was entertaining at numerous corporate function and fun days as well as shopping malls, wedding reception's, clubs, pubs and restaurant's.
Lord Geoffrey has quickly established himself as one of the countries top balloon modeller's and for the Christmas 1999 he was in demand all over the country, from Bournemouth in Dorset to Irvine in Scotland.
2000/3 The new millennium started with the festival at Henley on Thames followed by repeat engagements for British Telecom and The Royal Mail. Then came a three day corporate event for CGU insurance at the NEC Birmingham. Followed by another for them in Bournemouth. February Lord Geoffrey was at the London arena for HRH the Duchess of York's Challenge tournament. Easter saw a new client in the form of BAA Gatwick where he entertained passengers and the general public Land-side at Gatwick Airport. It has been almost non stop for the past three year with another trip back to the to Disney in Florida and then Europe. Then a trip to Windsor Castle for The Queens Jubilee celebration's where he performed in front of Her Majesty. He can also be seen in the film "Johnny English".
2003 He has been Turing the UK with Peugeot cars delighting thousands with his balloon sculptures.
>From then to now he has been all over the country performing at so many function and events that are to many to mention but include a summer season in 2005 at Thorpe Park in Surrey, Santa land Earls Court and the Ideal Home Show 2006 also at Earls Court.
Todate he has done four University tours for PwC can be seen Balloon Modelling at ED's Diner in Bluewater and London regularly and at Corporate events all over the UK and Europe.
He is in great demand for Corporate function and fun days, shopping malls, wedding reception's, clubs, pubs and restaurant's.

Entertainment Ideas for Toddlers Birthday Parties
Young children and toddlers can be quite a difficult age to organise a birthday party for. Here at www.EntertainersWorldwide.com we thought a useful guide for our recommended ...
Read More
Entertainment Ideas for a Carnival Themed Wedding
Themed weddings are all the rage at the moment with many options to choose from, and with summer just around the corner, carnival themed outdoor weddings will be appearing ...
Read More
Keeping Children Entertained During Wedding Receptions
When planning your wedding, you might be faced with that difficult decision of whether children will be invited to their wedding day. Many couples choose to keep their big ...
Read More
Creative Birthday Party Entertainment Ideas Fit For a Princess!
Planning a birthday party for a little girl is always a delight. If your daughter, granddaughter, niece or other special little girl is a budding princess, why not put on ...
Read More
New Years Eve Party Entertainment Ideas
New Year’s Eve parties are a celebration which takes place all around the World.  Friends and family gather together to bring in another year as the clock strikes midnight ...
Read More
Wedding Evening Reception Entertainment Ideas
When it comes to your wedding evening reception you will want to get the party started and let your hair down, celebrating your union together and of course with friends and ...
Read More
Entertainment Ideas to keep Little Boys out of Mischief!
If you are planning any kind of event and are having children attend, you might want to consider putting on suitable entertainment to keep them occupied.  Little boys, in ...
Read More
6 Proven Ways to Keep Children Entertained at Weddings
Are you inviting children to your upcoming wedding along with your grown-up guests?  Although weddings are fantastic and joyous occasions, younger children can easily become ...
Read More
Looking for a different type of entertainment? Search NowContact Us