Celtic folk music with awesome rhythmic drive. Plaid Menagerie: Sonoma County Wine Country's Celtic band for your Irish, Scottish, Renaissance or Pirate themed entertainment. While their sound is unique, it can be compared to Mollys Revenge, Blazin Fiddles, Banshee In the Kitchen and The American Rogues. 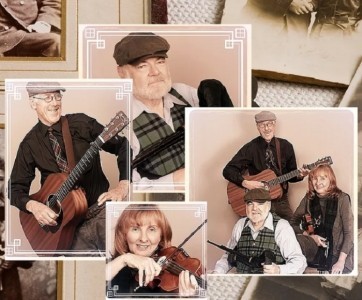 Plaid Menagerie - Barn Dance / Ceilidh Band - Sonoma, California Event Location: Bath, Michigan Event Type: Wedding 21st April 2012
"Plaid Menagerie made our wedding so meaningful and enjoyable! All of our guests have contacted us to tell us how special the music was and how truly beautiful it made our wedding! We went on our first date to a Highland Festival and the Celtic atmosphere created by Plaid Menagerie was truly awesome and meaningful to us both! Everyone was moved by bagpipes playing "Scotland the Brave" for the processional. I was especially moved by the fact that they learned "In my Life", to play before the ceremony started. My family is a bunch of Beatles fans and we all thought it was great! Besides being truly talented, Plaid Menagerie are professional and really nice people!"
Reviewed by: Barb V.

Plaid Menagerie have played for various contra dances in Sacramento, stage shows, weddings, funerals, the Japan fundraiser in the aftermath of the devastation of the earthquake, Scottish themed corporate events and St. Patrick's Day celebrations.

Plaid Menagerie have appeared at various venues, including the Paragon Room of the prestigious Claremont Hotel in Berkeley, CA; the Monkey House in Berkeley; Ritz Carlton in Half Moon Bay, CA; Nicholson Ranch Winery: The Olympic Club in San Francisco, CA; ceilidh's and contra dances around northern California.

Create a Magical Atmosphere with Wedding Ceremony Live Music
The most important part of many couples wedding day is of course their wedding ceremony.  The joining of two families and commitment involved will be remembered for many ...
Read More
Unusual Live Bands to Hire for your Party
If you are planning your next party, whether it be for a birthday celebration, wedding reception, anniversary or corporate get together, you might be looking for a live band ...
Read More
7 Exciting Entertainment Ideas for Weddings
Weddings are a wonderful celebration, full of joy and fun. When planning your own wedding it is always a nice idea to introduce ideas that really reflect you as a couple. ...
Read More
How to get everyone up on the dancefloor at your wedding reception!
By the time you get to your wedding evening reception, you’ll want to let your hair down and party the night away.  Every couple always has that fear that no one will get ...
Read More
Get People Dancing with these 20 types of Live Band
If you are looking for a live band for your next event, our website should be the first place you think of!  Our entertainment directory at www.EntertainersWorldwide.com ...
Read More
Looking for a different type of entertainment? Search NowContact Us