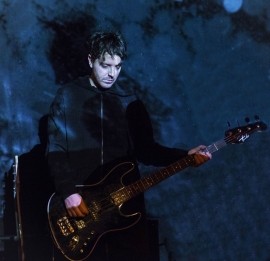 (no reviews)5.0
Country: Italy
Based In: Italia, Italy
Performs: Worldwide
From: Contact

Available for Show and concert in London
Influences:
Pop- Rock-Alternative

Antonio Di Nardo is a musician, bassist and composer
After some training changes, in 2010 he joined the Andy Malloy, alternative rock band with which he will release in August 2012 the independent album "Madre" promoting it in many festivals and the most popular in the musical scene.
The band will dissolve in November 2016.
However, his artistic creativity matures thanks to active participation in other projects; groups such as the Heaven Side, pop rock band in which he plays side by side in 2014 and the Step,band britpop Of London, city where among other things he moved for a period. For s ... everal years he has also collaborated with the singer-songwriter Antonio Grasso, and among others, together they compose the single "Come neve al sole" released in 2013, in which his post-rock influences stand out.
In 2017 he joins the Pure, alternative rock band for define the 3th album "Atlas" and released on 10 February 2018.
The band has been protagonist in different stages between Italy and abroad from the Fabrique of Milan to the Dropp Inn and Hard Rock Café in Copenhagen, as well as in the local London history of Hope and Anchor, The Victoria and The Islington.
His relationship with music also goes through other aspects, as above, such as the booking and management of individual artists and groups; his passion for music has always pushed him to constantly research new trends, influences and styles, from which he can derive his own identifying sound; currently uses guitar bass from the Tribe Bass & Guitar