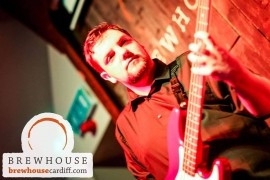 1
(no reviews)5.0
Country: United Kingdom
Based In: Cardiff, Wales
Performs: Worldwide
From: Contact

When contacting this member, please state that you are viewing their Entertainers Worldwide profile.
Request a Quote
Share this Page:
Profile Views: 491
Report this profile

A professional musician who is easy to work with and happy to take ideas and broaden playing style.
House Bassist, session playing for different bands mostly around South Wales. Learning set lists and the song choice basslines in their entirety before making them my own. Currently looking to play with many more musicians and become a full time professional. Experience playing Rock, Blues, Soul, Jazz, Country, Reggae, Soul, Funk etc. for Bars, Pubs, Theatres, Tribute Acts, Weddings and Corporate gigs.

Joel Jordan found an interest in music at the age of fourteen, when he moved from London to Wales and got his first electric guitar and lesson. After falling in love with music and practicing songs for hours on end, Joel took up the Bass Guitar two years later and it slowly became his main instrument. Within one month of playing the bass he was in his first band. When Joel was seventeen he joined heavy metal band Warpath and recorded a music video with them. With this band Joel toured the UK and Germany and he started to build experience of what to expect in different venues and how to approac ... h them such as bars, festivals and competitions.
A few years later, Joel wanted to perform in groups that were of varied style and continued working with original bands building his technique on the bass, acoustic guitar and vocals and steadily building repertoire ranging from pop, soul, funk and more. At age twenty-two, Joel joined originals symphonic rock group Symphonika, which also doubled as a tribute band for Electric Light Orchestra, and mixed function group for weddings and clubs. ​Later on, Joel worked with Cardiff's popular Tony Morley who is a walking singing Jukebox taking requests from the audience at every performance which helped Joel build up a repertoire of music he could perform on the spot covering a basis of many genres and hundreds of songs.

12 years of performing experience with advanced skills on the bass guitar, good sight reading and can follow charts well, perfect pitched. I am currently learning the Upright Bass to push myself further with different work opportunities.