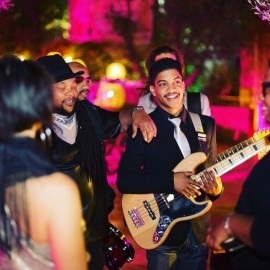 When contacting this member, please state that you are viewing their Entertainers Worldwide profile.
Request a Quote
Share this Page:
Profile Views: 150
Report this profile

I've been playing bass guitar for about 15 years and have worked with many established and up and coming artists in and around CT, South Africa. I present myself exceptionally well and tackle any genre of music. I have also been travelling abroad for about one year now and seeking to spread out more to other parts of world. I have been in Morocco for 6months and in Malaysia for 3months.

Biography
of
Musician & Sound Engineer,
Waldo Samuels
I started out as a drummer and had recorder( blokfluit) lessons at a early stage on primary school. I played drums in church alongside my Father who played bass guitar at the time and my uncle who plays the guitar. On high school I eventually learned to play guitar with the help of my Father, later on discovered my passion to play bass guitar.
I grew up listening to jazz legends like Abraham Laborial, Fred Hammond and more artists before their time. My love and passion for music had already been present at the time and on ... ly needed to be groomed and perfected by myself.
My dream of studying music at UCT had been put on hold after high school due to a lack of finance, but after matriculating I applied at The Cape Music Institute, run by Camillo Lombard. Being taught by the legendary Sammy Webber I learnt that success doesn't come easily and worked hard since Day1 of 2011.
The Cape Music Institute saw potential in myself and close to the end of my 1st year I started playing at corporate events with ex-students and lecturers of the institute including the head principle, Camillo Lombard. Doing sound checks at the Grand Arena for big concerts that took place, eventually professionalism kicked in and I started jamming with the likes of Blackkurrant, INK and The Citizens with Tye Platinum in and around Cape Town.
At the end of my 2nd year at the institute, I got booked to play at a 21st birthday party with 3 other students and lecturer Bradley Adams. Claire Philips made her appearance at the party and asked the band to Jam one of her songs at the party. As enthusiastic as I was to play bass guitar, Claire Philips happened to seek for a bass player for her set at the Mitchell's plain DSTV festival on 2nd December 2012, and booked myself on that night to perform with her in place of her bassist Eugene Ackerman who had been on the SA tour with Daniel Beddingfield at the time.
I am free lancing at the moment and have worked and recorded with a number of different local artists, bands and companies like Tamara Dey, Janice Roos, Jimmy Nevis, Kelly Fortuin, Melissa Allison, Blackkurrant band, Robin Peters, Bella, Camillo Lombard, Claire Phillips, Angelo Bagley, Vuvu Khumalo, Zeldene McDonald, Mark Williams, Sade van Schalkwyk, The Music Continues(TMC), Nathan Daniels, Epiphany band, Blackstone band, Chasing Summers band, Zoe Modiga, The Waldo Samuels Trio ft. Rey'd, and many more. In the start of 2015 I started a small audio-visual and entertainment company called YoSoul Productionz and also collaborate with Bradstar entertainment cc.
I am currently free-lancing with @JanicNow who has been working with local artist Jimmy Nevis who has featured with the band in one of her shows at the Grand West Casino in Cape Town. I am also currently working with a local party band from Paarl/ Wellington, we perform at local clubs every weekend._2016
2017 till present travelled and worked with Hypnotik band At Sofitel hotel night clubs in Marrakech, Agadir and Rabat for a period of 6months and Immediately there and still currently working a 3month contract for 6nights a week at the Zeta bar in the Hilton Hotel, Kuala Lumpur, Malaysia. Contract ends start of April 2018.
Other than just performing live gigs, I like to call myself a bass player and music director as I have the skills of producing chords for original material brought to me for recording or performance purposes. My next goal is to get registered with SAMRO as I have recorded a few bass lines that are being aired on Radio in South Africa(mostly Cape Town)
Email: Waldosamuels29@gmail.com
YouTube, Facebook and Google: Waldo Samuels 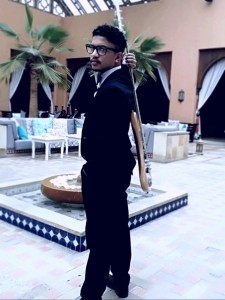 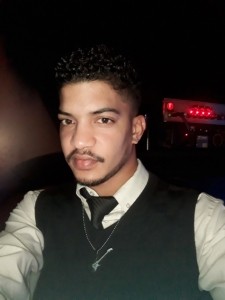