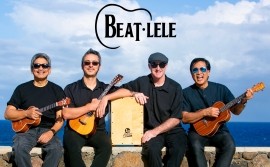 We are four Beatle loving musicians from Oahu, Hawaii with decades of singing and performing experience. We are unique in that we sing/perform the great music of the Beatles, but with an island twist and play ukulele's and cajon for percussion.
: 808-387-XXXX Click here to reveal
full number

When contacting this member, please state that you are viewing their Entertainers Worldwide profile.
Request a Quote
Share this Page:
Profile Views: 1037
Report this profile

BEAT-LELE, a unique Hawaiian-style Beatles Tribute group, is comprised of Sonny Aquino as "John", Nolet Quiason as "Paul", Alastar McNeil as "George" and Dennis Muth as "Ringo" who sing and perform their respective parts as close to the original recordings of The Beatles as possible. It is simply three ukulele's and a cajon, or box drum, for percussion. Being that the Beatles are so "vocal centered", hearing the songs this way is an absolute joy to the listener as we play songs that are very familiar to audiences and have them singing along as they are reminded of these great melodies from the ... ir younger years.
This "island" sound of The Beatles is unique yet has a worldwide appeal as the music of The Beatles continues to grow in popularity from generation to generation in much the same way the Ukulele has grown in popularity worldwide.
We perform the songs with absolute vocal and instrumental precision and tie in humor and typical Beatle-banter in between the songs. We also engage the audience in sing alongs and periodically invite the guests to join us on stage as the "5th Beatle" to help add some percussion to a song.

We play over 90 Beatle songs currently and continue to grow our list. We cover the entire spectrum of their career from Love Me Do, Please, Please Me, Hard Days Night, Help!, Yesterday, to Here Comes the Sun, Let It Be, Hey Jude, Something, Come Together, and With A Little Help From My Friends found in their later years. We do not don wigs or costumes but could be open to that if absolutely necessary. For us, it is all about the magic and beauty of the music.

BEAT-LELE began with the same members eight years ago on Oahu as a Beatles Tribute band performing all over Oahu for corporate events, private events and various clubs such as Hard Rock Cafe and Rumfire. In addition, Alastar ("George") and Dennis ("Ringo") performed the past three years in a Waikiki Beatles Tribute production of The Fourever Fab Show at the Sheraton Princess Kaiulani Hotel Showroom four nights a week, complete with wigs and three costume changes. Alastar also performs part of the year with the premier Beatles Tribute group, RAIN, currently touring the U.S.
A couple years ag ... o, the original members realized that Beatle Tribute bands were a dime a dozen and decided to re-invent themselves as a unique, truly Hawaiian-style Beatles tribute band performing music of the Beatles solely on Ukulele's and a cajon for percussion. The response has been tremendous and are about to release their first single, If I Fell on their own label. They just released a full album this spring with legendary Hawaiian music producer and Grammy Award Winning, Dave Tucciarone, winner of 14 Na Hoku Awards, Hawaii's equivalent to the Grammy.
BEAT-LELE was recently invited to perform at International Beatle Week at the end of August where they will be performing seven straight days in Liverpool, England including the famous Cavern Club where the Beatles got their start. Last year, 300,000 people attended this international event. No other group in the history of International Beatle Week has ever been from Hawaii. (www.internationalbeatleweek.com)
With their debut album on the way, and their past commitments with other groups behind them, BEAT-LELE is ready to take the show on the road (or the high sea's!) and ready to travel the world over as the music of The Beatles truly spans all Across the Universe!

BEAT-LELE - Beatles Tribute Band - Honolulu, Hawaii Event Location: Waikiki, Oahu, Hawaii Event Type: Restaurant/Bar 8th August 2017
BEAT-LELE performed regularly in 2015 into 2016 at Rumfire restaurant overlooking historic Waikiki Beach and were always very well received. Who doesn't love The Beatles! It was a wonderful way to entertain the tourists and locals alike and the band was so easy to work with.
Reviewed by: Laura Begent

As BEAT-LELE and our previous tribute band, Day In the Life, we have performed dozens of events and functions ranging from the Hawaii Convention Center to Hard Rock Cafe-Honolulu to Aloha Tower and Showbox along with smaller venues such as halls, bars and clubs. Other than Bar Mitzvahs and Jewish Weddings and Trade Shows, we've done about everything else mentioned.
We were also featured on numerous local radio and TV morning shows not to mention print advertising. 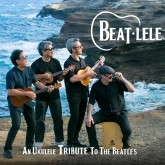 BEAT-LELE, An Ukulele Tribute to The Beatles


Enjoy the beautiful combination of the timeless music of The Beatles combined with the Ukulele!