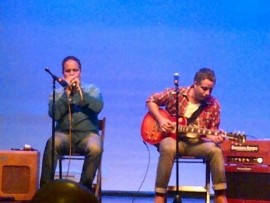 (no reviews)5.0
Country: Argentina
Based In: ARGENTINA, Argentina
Performs: Worldwide
From: Contact

We are a traditional blues duo composed by Nico Smoljan on harmonica and vocals, and Juan Codazzi on guitar and vocals. Both musicians born in Argentina have over 15 years of experience on stage with many different bands that participated in the most important festivals
: +54116531XXXX Click here to reveal
full number

We are a traditional blues duo composed by Nico Smoljan on harmonica and vocals, and Juan Codazzi on guitar and vocals. Both musicians born in Argentina have over 15 years of experience on stage with many different bands that participated in the most important festivals of the Blues in South America, such as the Mississippi Delta Blues Festival (Brazil), Blues Island (BRAZIL) and Buenos Aires Blues Festival (ARGENTINS).
They have both toured all over Southamerica with dozens of great US Blues legends such us Duke Robillard, Magic Slim, Bob Stroger, John Primer, Lurrie Bell, Shirley King (BB d ... aughter. King), just to name a few.
Nicolas Smoljan is also endoser of the most important harmonicas manufacturer like HONER, FAMA MUSIC, SOUNS FX, and LHC Vintage Vale amps, he has his own Smoljamp signature amp series.
In 2015 he recorded his first record with great success feautering special guests like Lurrie Bell, Mud Morganfield and Eddie Taylor Jr.
The sound of this duo , originally formed to make shows in small places but ended up playing at big festivals , is inspired mainly in the Chicago Blues of the 50s and 60s .
They include in their repertoire versions of Jimmy Reed , Little Walter , Muddy Waters, Robert Johnson , John Lee hooker , etc.