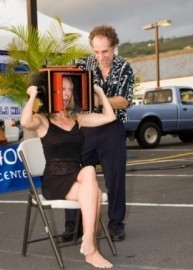 (no reviews)5.0
Country: United States
Based In: Hawaii
Performs: Worldwide
From: negotiable

Arneleo, aka: Arnie Rabin, has been delighting Kona audiences for
the past 43 years. A day does not go by that he has not at least done one,
small improvisational show for somebody. He was bitten by the "magic bug" at age 5, when he given a magic kit as a present. The serious study of the art began when he needed an illusion to be part of a theatre production. He then realized that a magic act was the media that utilized all he had ever learned in performance and visual arts.
Last year’s performances included shows for Hualalai Academy, Kona Head Start as well as several private p ... arties and corporate engagements. He also taught Magic at SKEA summer and Spring Art Camps.
Arneleo is recognized by his fellow magicians, as a leader in the magic community of Hawaii. He has been a key player in producing "The
Magic Spectacular" since its inception, 28 years ago. This year he is serving as President of The Big Island Magic Club. He has been a magic consultant, performed for numerous luaus, parties, charity benefits, corporate functions; and taught magic classes. He has invented numerous magic routines. "Triple Rotation", a close up card routine was published in "The Linking Ring", the official journal of the International Brotherhood of Magicians.

Most Hawaii schools and libraries.
Shopping Centers
Most major resorts
The Magic Spectacular. This is the 28th annual event this March at the Aloha Theatre.