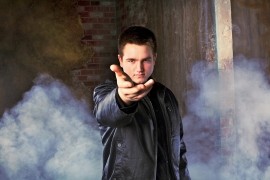 (no reviews)5.0
Country: United States
Based In: Phoenix, Arizona
Performs: Nationwide
From: Contact

Eric Giliam provides magical entertainment through out the state of Arizona as well as nationally. Specializing in small and large corporate events, Eric can create a custom tailored live show catering to the specific needs of the guests who attend your special event.
Request a Quote
Share this Page:
Profile Views: 599
Report this profile

Eric performs magic for any type of party and social setting. His specialty is his full, traveling stage show performed mainly for schools, conventions, corporate parties and other private events.
This show includes special LED theater lighting, a professional sound system, stage curtains, and a tech person to run the sound and lights. It’s a 1st class show with comedy and classic magic, audience participation, and is all choreographed to music and lighting. Performed with the house lights dimmed for a live, theatrical feel, the show is perfect for after dinner entertainment.
Depending ... on your event, budget, and venue, Eric can cater his performance to suit your needs.
With no audience too small or large, he is sure to impress your guests, leaving them completely amazed! Many people have said this full show was the best entertainment they’ve ever had at their event.

Born and raised in Alaska, Eric first became fascinated by magic at age twelve when he saw David Copperfield perform in his hometown of Anchorage. He thought the illusions he saw were incredible and soon after decided that performing this art on stage was going to be his life’s passion.
Since then his rise as a performing magician has been amazing. He has won numerous national and international awards including the title of World Teen Magic Champion in Las Vegas. His travels have taken him overseas to London and Rome performing on primetime TV shows.
Here at home in the states, he has ... relocated to the Phoenix area to continue his entertainment career and has become a local hit, performing sold out public shows. He travels throughout the Southwest and has been regularly booked to perform at corporate events on the Strip in Las Vegas, most recently at the Monte Carlo and Paris hotels.
While Eric can perform magic for any type of party and social setting, his specialty is his full, traveling stage show performed mainly for schools, conventions, and corporate events. Numerous audience members have said the show was the best entertainment they ever had at their event!