I'm looking for:
near:
No valid location selected.
You Are Here: Magicians / Cabaret Magicians / United States / Illinois / The Magic of David Shareef 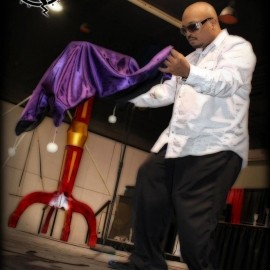 (no reviews)5.0
Country: United States
Based In: Illinois
Performs: Worldwide
From: $1000

A native to the city of Chicago, David Shareef got his start in magic at the age of 5 when "The Greatest of all time" Muhammad Ali came to David's school and performed magic for David's classroom:, and as the saying goes "the rest is history! David Shareef performed in the Bahamas, Mexico and all over the United States. David Shareef was dubbed "The Baddest Brotha on the Planet" by music legend Ice T. Performing over 300 shows a year for such celebrities as Howard Hewitt, Barry Bonds, Robert Townsend and President Barack Obama! You can also see David Shareef on SYFY Chanel's television hit s ... eries Wizard Wars!

Magician on Cruise Lines, Corporations such as Bacardi and Boy Scouts of America also Comedy Clubs, Middle Schools, High Schools and Universities. Wedding Receptions, private event such as family reunions and churches over the past 21 years as a full time professional magician.