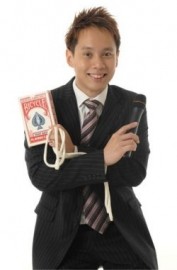 (no reviews)5.0
Country: Singapore
Based In: Singapore
Performs: Nationwide
From: From SGD 299

Derrick Lee of Cream of Maestro, is one of the Singapore's leading magical entertainers. His magic is stunningly visual and delivered with a great sense of humor and fun.
Request a Quote
Share this Page:
Profile Views: 394
Report this profile

Derrick Lee of Cream of Maestro, is one of the Singapore's leading magical entertainers. His magic is stunningly visual and delivered with a great sense of humor and fun.
He will not only pull up a trick or two, but also heat up the event with some of the interactive creative Cartoon Balloon with the audiences.
Derrick received much exposure from being able to travel widely around the world to perform and improve his magic skills by meeting magicians around the world, such as from South Africa, Australia, London, Los Angeles (Hollywood), Japan and New Zealand.
Fluent in English, Manda ... rin and Japanese, Derrick has made a name for himself in the entertainment industry with his dexterous magic skills. Derrick has had extensive experience in emceeing for events.
Derrick possesses a natural ability to interact and entertain a wide spectrum of audiences using his swift and agile magic skills while putting them at ease, and is not just popular with children but also comfortable in more formal corporate settings.

The Maestro himself, Derrick, has always been curious about magic as a young kid. He would often persuade his mum into buying those “Trick or Magic” packets whenever they shopping in NTUC.
During his free time in the National Service, Maestro Derrick further explored his fascination of magic and developed his talent of the art over the years, as well as Fire Art and Balloon Sculpting. He has met a number of fellow magicians from different parts of the world, such as Los Angeles in the United States, Australia, London, UK, South Africa, Japan and New Zealand.

While he has made a name in the magic entertainment industry with his expert skills, he has also hosted in a myriad of prestigious events, like Balloon Runway 2008 @ Downtown East, Toshiba Tec Singapore D&D (20th Anniversary), MediaTek D&D (Casino Night), Microsoft Movie Event, FX1 Trader’s Night and Sesame Street, Madagascar 2, Looney Tunes and Bakugun shows. His fluency in English, Japanese and Chinese dialects like Mandarin, Hokkien and Teochew has enabled him to emcee among countless other cultural events and shows.