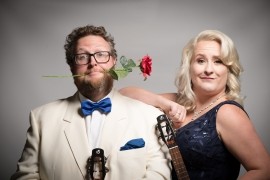 (no reviews)5.0
Country: United Kingdom
Based In: Hartley, South East
From: £500

Opera-lele is a unique comedy music act specialising in performing music from opera and musical theatre accompanied by the emotionally powerful yet understated twang of their ukuleles!
Request a Quote
Share this Page:
Report this profile

Opera-lele is a unique comedy music act specialising in performing music from opera and musical theatre accompanied by the emotionally powerful yet understated twang of their ukuleles!
Having trained as singers at the Royal College of Music and Goldsmiths College in London, George Bartle and Amanda Harkett have gone on individually to forge careers for themselves as entertainers of the highest calibre.
In 2016, Opera-lele burst onto the music scene with a Main Stage festival performance. The audience was stunned and excited by what they saw and heard. Opera-lele received a standing ovati ... on and were described by many as the hit of the festival.
Since then, Opera-lele has Been collecting standing ovations at festivals, theatres, churches, castles and even private islands across the UK and overseas.
Their performances include appearances at the Canterbury International Arts Festival, Music on the Marr Festival, Halesworth Arts Festival, Hebden Bridge Burlesque Festival, South Downs Folk Festival, nearly every ukulele festival in the UK and in Poland, Austria, Finland, Czech Republic, Ireland and Germany.
They have toured extensively around the UK with their critically acclaimed full-length theatre show 'Access All Arias' and their 'Opera-lele's Christmas Show'.
In 2017, these National Treasures In Waiting were voted 'Breakthrough Ukulele Artist' by the readers of UKE Magazine.
George & Mandi are delighted to be Flight Artists performing exclusively on Flight Ukuleles.