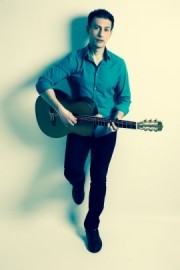 Professional concert & session guitarist, with more than 20 years of experience on stage, who enjoys performing with other musicians too. Genres: Classical, folk, Spanish, Latin, Pop and more.
Request a Quote
Share this Page:
Profile Views: 1291
Report this profile

Andreas Moutsioulis is a Greek-born guitarist and arranger with extensive experience across a variety of music genres. His western music studies together with the music of his middle-eastern roots have brought him close to different musical styles since an early age. This background of classical, pop, folk and world music has led him to the idea of blending and combining all these styles.
Having studied classical guitar at the Municipal Conservatoire of Thessaloniki, the Ionian University of Greece and the Mozarteum in Salzburg, Andreas began performing professionally at the age of 16. His ... appearances include concerts as a classical guitarist as well as performances as a session guitarist with bands and orchestras.
Career Highlights
Invited to join an orchestra as a soloist at the age of 16.
Prize-winner in multiple international competitions.
Holder of four titles in guitar performance from major European universities.
Performance as a soloist with the “Athens Camerata” for HRH Princess Irene of Spain.
Appearances in prestigious venues such as the Athens Concert Hall “Megaron” and the St. Martin-in-the-Fields, London.
Interviewed repeatedly by the Hellenic National Radio and the BBC.
Between 2001 and 2011, Andreas toured extensively in Europe and the USA and has performed as a classical guitarist (solo and in ensembles) as well as being a leading guitarist in pop, folk and contemporary bands.
His love for the guitar and his wish to present new musical experiences to his audiences caused him to look for ways to broaden its repertoire and help the instrument to develop. Since 2008 he has made his own transcriptions for the guitar of works by composers of the wider musical repertoire. His arrangements include works of different styles and genres for solo guitar as well as for ensembles.
Andreas is an independent recording artist and music producer. He has released two CD albums of music for solo guitar. Both albums contain music of different styles and cultures, brought together as a unity. At present, he is working on a third album which will include his own compositions.
Together with performing, Andreas devotes time to teaching. Living in Bristol, UK at present, he teaches a number of promising students. Being a fan of technology, he also teaches students all around the world through Skype.
Andreas is a qualified teacher (QTS) and a member of the Incorporated Society of Musicians (ISM). 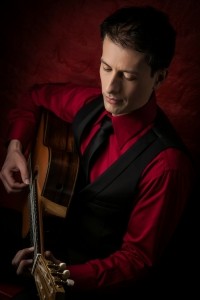 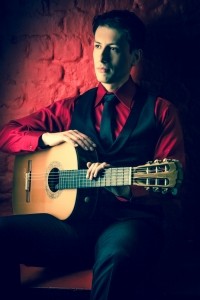 Andreas Moutsioulis - Classical / Spanish Guitarist - Bristol, South West Event Location: Oxford Event Type: Private event. 13th March 2016
The concert covered a wide range of musical forms and styles, all of which Andreas Moutsioulis accomplished fluently and effortlessly. The classical guitar when played with Andreas’ professionalism is well suited to our hall, so perhaps we should repeat the success of this recital before too long.
Reviewed by: IMS
Andreas Moutsioulis - Classical / Spanish Guitarist - Bristol, South West Event Location: Royal Northern College of Music Event Type: Concert 10th May 2014
Andreas Moutsioulis, born in Greece but currently resident in Bristol, has much to offer. Equally engaging was Elogio de la Danza and yes, Moutsioulis made a decent fist of realizing the golpe against a bass note that we all struggled with when this piece first took off a decade or so after its creation in 1964. Most successful were the settings of two songs by Theodorakis. If Maria Farandouri appeared on stage as a surprise guest, my evening would be complete. Following a tidy and rhythmic Sevilla by Albeniz, the nose-to-tail pairing of Farewell by Sergio Assad and Un Dia de Noviembre by Leo Brouwer proved surprising effective and generated some of Moutsioulis’ most classy playing. Even the ensuing Libertango by Piazzolla felt more inspiring than is customary. A warmly received Mancunian offering from a guitarist whose migration to these shores is to be welcomed.
Reviewed by: Paul Fowles
Andreas Moutsioulis - Classical / Spanish Guitarist - Bristol, South West Event Location: Athens's Concert Hall Event Type: Concert 13th October 2009
Andreas Moutsioulis expressed clearly the melodic lines and the rhythmic features of the concerto. The very talented musician from Thessaloniki played masterfully with the colours and created a unique atmosphere. The concert was attended by the HRH Princess Irene of Spain, President of the Foundation “World in Harmony” and ardent supporter of new musicians.
Reviewed by: Musical Tone Magazine