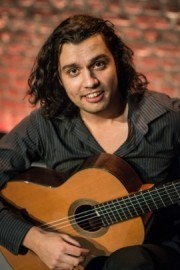 (no reviews)5.0
Country: Germany
Based In: Köln, Germany
Performs: Worldwide
From: Contact

When contacting this member, please state that you are viewing their Entertainers Worldwide profile.
Request a Quote
Share this Page:
Profile Views: 404
Report this profile

Can prepare up to 6 hours of repertoire if necessary.Special request are also not a problem.Can learn new pieces quick and with ease.Repertoire consists of Spanish,Italian,Baroque,Modern,Flamenco,South American music and different Spanish,Latin and folk dances, depending on the requirements and taste of music of the host.Normally I perform Solo,but i,m open too collaboration with other musicians, if requested.
Have chamber music experience also. Fluently speaking 4 languages-Bulgarian,Russian,English and German.

The Bulgarian guitarist David Dyakov is one of the most prominent guitarists of his generation. He was born in 1994 in Braine-le-Comte, Belgium, and as an eight-year-old he began guitar lessons with Petar Markov, who recognized David's exceptional talent. At the age of eleven, David was accepted to the New Bulgarian University Sofia,as a young student, where he began undergraduate studies with Dimitar Doichinov.
In the same year, he performed Giuliani's Concerto op. 30 with the Orpheus-Orchestra, and in the following three years he gave more than 40 concerts as a soloist with different or ... chestras, including the Sofia Philharmonie and Athens Philharmonic Orchestra. In 2008 he continued his studies at the Bulgarian National Music School in Sofia with Stolina Dobreva, and in 2010 he moved to Koblenz, Germany, to study with Hubert Käppel at the Koblenz International Guitar Academy. In 2010 he was also named ''Musician of the Year'' by Classic FM, one of the most important radio stations in Bulgaria.
In 2012 David released his first solo CD, Il Diabolico, on the label KSG Exaudio. Presenting works by Bach and Paganini, the recording has garnered effusive critical acclaim.In 2017 he released his second solo CD''Spanish Guitar Music'' on the Aurea Vox Label.
David has performed both solo concerts and with orchestras throughout Europe, the USA, and in China, where he has also taught masterclasses at the Peking Central Conservatory, Tianjin Conservatory of Music, and others.
Since 2013 David has studied at the Music University, Cologne, in the class of Prof. Hubert Käppel.
David has won more than 20 international guitar competitions, including Forum Guitar Wien (Austria), Gorizia International Guitar Competition (Italy), Koblenz International Guitar Competition (Germany), International Guitar Competition Deajong (Korea), Rago International Guitar Competiton (Germany), International Guitar Competition Veria (Greece), and the Aachener Gitarrenpreis (Germany). 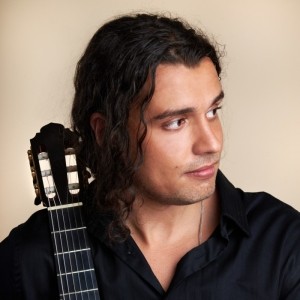