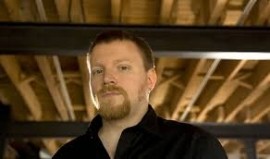 The former member of JUNO/ECMA Award-winning Irish Descendants, Michael Hanrahan, wows crowds while forging ahead with his innovative original songs and recordings. Michael's set includes originals, and covers of everything from Stan Rogers, The Beatles, The Irish Descendants, Ryan's Fancy, etc.

When you hear the trace of history in his voice and the tune washes over; you are not sure if you are in present day St. John's, Newfoundland or somewhere in Waterford in the early part of the century. He is a voice for today who has not forgotten yesteryear.
Mike Hanrahan is one of Newfoundland and Labrador’s most innovative vocalists and instrumentalists. He maintains a living playing music in his hometown of St. John’s, Newfoundland playing in many different bands and as a solo artist.
After touring for seven years as a member of the Juno award winning Irish Descendants, recordin ... g as a session player for countless CDs and being recognized as a prolific multi-instrumentalist Mike Hanrahan is constantly performing, creating, and recording.
His first release “Tie Me Down” was released in 2005. Hanrahan asked Dermott O’Reilly (Ryan’s Fancy) who was both mentor and friend to Mike to do the cover track as a duet. O’Reilly passed away in 2007 and the CD now stands as testament to the passing of the torch to the next generation of Newfoundland and Labrador Folk Musicians. His second album "Freeing lonesome tune" was released in July 2009 and is another example of his innovated song-writing and arrangement of music.
Appearing on “Across the Water, The Gift, Southern Shore and Blooming Bright Star” with the Irish Descendants, Mike has also recorded with Banshee, The Ennis Sisters, Shanneyganock, Jim Fiddler, The Monday Nights, and many others. Most would not think of recording without help on many tracks by Hanrahan’s guitar, bouzouki, banjo, and mandolin style.
He has appeared on Canada AM, The Juno Awards with Great Big Sea, The East Coast Music Awards CBC Show and in Trafalgar Square with The Ennis Sisters in celebration of Beaumont Hamel. Recently he performed at the JUNO’s Showcase in St. John’s 2010 and MusicNL’s Export Ready Showcase 2011. Hanrahan has performed at many of North America’s greatest folk festivals, hundreds of corporate and special events over the last ten years and continues to do so. His song “All Our Hearts” from his record “freeing lonesome tune” was recently selected by mvyradio.com who is one of the most listened-to internet radio stations in the world with mp3 downloads of the enormously popular Local MusiCafe in the hundreds of thousands.
If you are in St. John's, Newfoundland and want to hear some great music by a passionate, talented artist come see Mike's solo act, you will not be disappointed.
“My success as a musician owes much to the many artists I have played with. I am fortunate to have them as influences and to be able to remain in Newfoundland, in my home town, doing what I love and am most passionate about.”
---Michael Hanrahan

Michael Hanrahan has been playing music for 20 years. He started studying classical guitar, then moved on to instruments like the Bouzouki, Mandolin, and Banjo. He played with the JUNO award winning Irish Descendants for 7 years which then he moved on to his solo career. He has played with The Ennis Sisters, Great Big Sea, and Middle Tickle to name a few. The has been on countless CDs and has toured throughout North America and Europe.