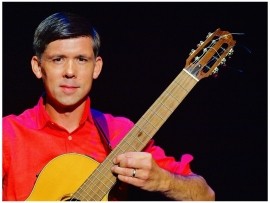 Tom McLauchlan is a prize-winning Classical/Crossover/Finger-style Guitarist graduate of the Royal College of Music, London. A very wide repertoire – from Cavatina to Clapton, from Latin American to Classical. Film Score Favourites to Well-Known Classical Favourites.
Request a Quote
Share this Page:
Report this profile

Tom McLauchlan is a prize winning classical guitarist graduate of the Royal College of Music and is fast establishing himself as one of the most dynamic and versatile guitarists of the new generation.
He studied with Gary Ryan and now maintains an eventful performing career as a soloist and in duos featuring flute, violin, voice or guitar. He is a former artist of the Live Music Now! Youth Music Fellowship Scheme.
Performances have taken Tom all over the world, including concerts at some of the UK’s leading venues and festivals. He has performed at the Bridgewater Hall Manchester, Purc ... ell Room London, Cardiff Millennium Centre, Fishguard International Music Festival, Dundee Guitar Festival and for the 7th and 8th International Guitar Festivals in London.
He made his concerto debut with the Farnborough Symphony Orchestra and conductor John Forster, performing Rodrigo’s ‘Concierto de Aranjuez’ and in 2000 was presented with an Exhibition Award from Trinity College of Music.

With over 18 years of event based experience, and a varied repertoire, Tom is the perfect accompaniment to your event.
Performances have taken Tom to over 20 countries including Greece, Mexico, Guatemala, Venezuela, Panama, Chile, Argentina and Brazil.

Tom has worked for many first class clients including Cunard and P&O Cruises, Marks and Spencer plc, The Institute for Government and the Royal Air Force, Piccadilly.
He has performed at many of the country’s leading concert halls and arts festivals including the Fishguard International Music Festival, Dundee Guitar Festival, Bridgewater Hall Manchester, Cardiff Millennium Centre and for the International Guitar Festival at the Bolivar Hall, Embassy of Venezuela.