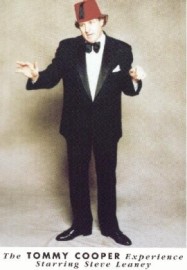 When contacting this member, please state that you are viewing their Entertainers Worldwide profile.
Request a Quote
Share this Page:
Profile Views: 182
Report this profile

The Show is 1 x 60+ minute set in which Stephen performs a throw back in time cabaret show based on Tommy Coopers live performances, the show includes original Tommy Cooper material and props, classic one liners and comical mayhem that Tommy was famous for, the show also includes the hilarious bottle routine and other classic magic tricks and finishes off with the famous 'Hat Routine'
The show is family friendly with some audience participation.

In 1993 Stephen gave up his dangerous profession has a commercial diver in the offshore oil & gas industry to pursue an acting career.
Stephen got his first break in acting professionally at the Torch Theatre in Milford Haven when the artistic director Mike James auditioned and Casted Stephen in the lead role has Tommy Cooper in “Frankie & Tommy” a play centered around the early days of Tommy’s career when he was performing for British Troops in Egypt during WW2
Stephen received rave reviews for his portrayal of Tommy which inspired two veterans of comedy, Denis Kirkland For ... mer director of the TV series “Tommy Cooper Half Hour” and Vince Powell a prolific comedy writer for TV to write and produce a stage show ‘Tribute to Tommy Cooper’ for Stephen.
Stephen was honored when he was introduced to Tommy’s widow Gwen Cooper after which Stephen became a good friend and regular visitor to her home in Chiswick when performing in and around London. On one visit Gwen gave Stephen an original Fez worn by Tommy and various small stage props that Stephen still uses today in his show.
From 1995 Stephen toured with show extensively throughout the UK and overseas including Cruise Ships, Major Holiday Companies and along the way has worked with some great artists including, Norman Wisdom, Jim Davidson, Bradley Walsh, The Barron Knights, Chaz and Dave, Joe Longthorne, Madeline Bell, Nicolas Parsons, Mike Reed, Jimmy Cricket and many more.
In 2004 after a 2 year residency in Lanzarote performing at Clubs and Hotels on the Island, Stephen decided to ‘rest’ the show to pursue other ventures and now in 2019 the Show is set to return in “An evening with Tommy Cooper” 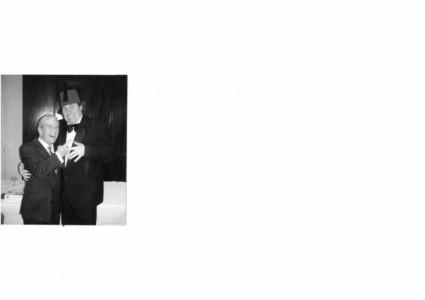 The Tommy Cooper show has appeared on Cruise ships, In theatres, Hotels, Clubs and Bars throughout Spain and the UK, The show has also appeared in Venues in Dubai, Abu Dhabi and Bahrain.

Share this Page:
Click here to view all of our Clean Stand Up Comedians on Entertainers Worldwide
Browse all Entertainment Hire options!