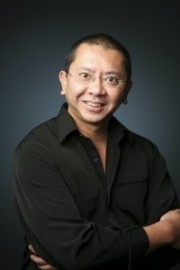 (no reviews)5.0
Country: Australia
Based In: South Australia
Performs: Worldwide
From: Contact

Hung's stand up work and theatre shows are always edgy, satirical, political and his musical send ups go straight for the jocular.
Request a Quote
Share this Page:
Profile Views: 997
Report this profile

Headlined and encore in his very first stand up gig. Hung, the world’s first, best and tallest Vietnamese comic guarantees to spin your mind, dazzle your imagination and awaken your funny zones.
29th April 1975, the last day of the Vietnam war, a nine year old boy jumped onto a leaking prawn trawler on Saigon River with a box of dried biscuits and some seasick pills and managed to survive thirst and hunger to cheat death to become one of the first Vietnamese boat people to land in Australia.
His movies include The Wogboy, Fat Pizza, True Love and Chaos, Broken Hill and Sensitive New Age Ki ... ller.
Hung is a favourite at Montreal Comedy F estival, Edinburgh Festival and Melbourne International Comedy Festival
An author, musician, clown, actor and all round song and dance man…Hung’s stand up work and theatre shows are always edgy, satirical, political and his musical send ups go straight for the jocular.
His first book ‘The Yellow Peril From Sin City’ was released through Penguin. His second, a children’s book ‘BarryNoodles & DaKillerBs’ is with Random House.
A constant on the world festival stage and TV since 1988, Hung has made documentaries for the ABC, SBS, Discovery Channel. TV includes CNN, MTV, The Muppet Show, Wow Wow[Japan], London Weekend Television and all throughout Asia.
“We used to live across the road from the Presidential Palace, which in the 70s in Saigon was a really stupid place to live. They say Vietnam brought the war into people’s living rooms…yeah, you’re telling me, and we didn’t even have a TV.
One side of our front yard was a statue of the Buddha that my father, Le Thanh Nhon, made. He was Vietnam’s most famous artist. At the end of the war, the communists smashed all his work but they didn’t touch his Buddha because there’s an old Buddhist saying; KARMA SUITS YA.
We left Vietnam 29th April 1975. We had 3 hours to leave, so quickly we packed our bags, loaded the car, fed the dog…to granny, and fanged it down to the dock. There would’ve been heaps more of us except, at the same time, Hollywood released JAWS. And that, my friends is why ‘CHARLIE DON’T SURF!” 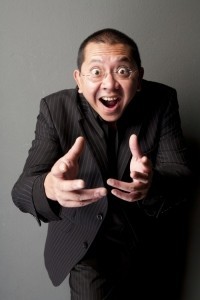 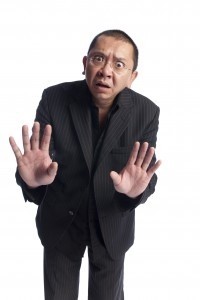