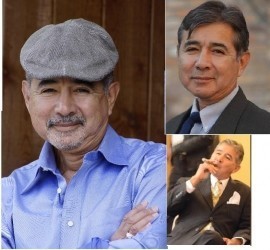 At 15, in a gang, math teacher, retired Marine LtCol; throat cancer 11 years ago; divorce, dating. After explaining my gang life-"I went Ancestry.com-found that my great, great, great, great grandfather...was in the same gang! I make my life funny. I can send a tape.
: 323592XXXX Click here to reveal
full number

When contacting this member, please state that you are viewing their Entertainers Worldwide profile.
Request a Quote
Share this Page:
Profile Views: 796
Report this profile

Actor Bio – Julian Vazquez
Julian is a comedian working at the Comedy Story, Flappers, Stratosphere and South Ppoint Hotel in Las Vegas. He has produced comedy. Julian is founder and serves as Chief Editor of The Stand Up Comedy Magazine. www.thestandup.net
Julian is an actor, comedian, producer and singer (okay, Karaoke); an engineer, math teacher, retired Marine LtCol, graduate of the Stella Adler Academy of Acting; has performed in several stage plays and a few movies. He also taught acting for 5 years and continues to coach acting on request. He produced and hosted a show called INs ... ide the INdustry on Time Warner Cable, interviewing people who work in and around the entertainment industry. He produced and played a lead role in an award winning short film called Tasteless, Dos Coyotes and Phrenic. Julian has also directed one-act stage plays. Julian has also served as Associate Producer on a new musical called Bert n’ Eddie, the story of Bert Williams and Eddie Cantor.
Julian is a retired Marine LtCol, Radar Intercept Officer (RIO think Goose in Top Gun) in the F-4 Phantom jet fighter; an Army Airborne graduate with many jumps under his belt’ an Electrical Engineer, BSEE from Cal-Poly, Pomona; Math, Algebra and Calculus teacher. Julian has a keen understanding of aviations systems, aerodynamics, tactics, avionics with intimate knowledge in Infrared Guidance Systems and countermeasures; how “heat-seeking” missiles work and how to defeat them. Julian as conducted military operations with the following military forces – Britain, Canada, Australia, New Zealand, Thailand, Italy, France (Studied French in order to work with the French military) and underwent cold weather training with the Canadians. Julian’s hobbies include golf, traveling and karaoke.