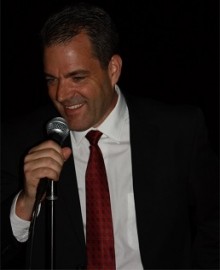 Nationally recognized, award winning comedian. His comedy has been featured on Late night television and he has can be seen performing across the United States as well as internationally.
: 623-229-XXXX Click here to reveal
full number

When contacting this member, please state that you are viewing their Entertainers Worldwide profile.
Request a Quote
Share this Page:
Profile Views: 723
Report this profile

Mike James is an in-demand comic. He performs as a corporate entertainer and can also be found on stage in some of the most prominent comedy clubs around the country. His comedy has been featured on The Tonight Show, and Comedy Central. Mike is an award winning entertainer and can be heard on 24/7 Comedy Radio as well as Sirius. Mike continues to entertain wherever he is.

Mike James comedy has been featured on both television and radio.
He has won numerous national awards and comedy festivals.

Over 15 years experience as a nationally performing corporate and event entertainer, including casinos.

From GM and Ford to Microsoft and HP, Mike has a long list of very satisfied fortune 500 clients as well as small businesses and organizations.

Mike James is an in-demand, nationally recognized comedian, and he is available for your event!
Mike is very experienced in virtual events as well.
Even while performing virtually, Mike, performs a well produced, live staged event, just as though your audience were at a live comedy show.
He will ensure that your audience feels included and part of the show.