You are contacting Nick Johnson 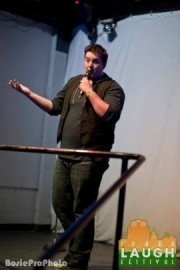 (no reviews)5.0
Country: United States
Based In: Portland, Oregon
Performs: Nationwide
From: Contact

Nick has worked hard to be seen as more than just another "kid" on the comedy scene. He soon became known as a "Young comedian with a very professional attitude, and fantastic stage presence." -Comedian Dave Russo
Request a Quote
Share this Page:
Profile Views: 397
Need Help?
✖