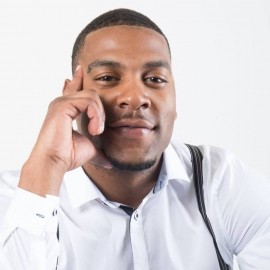 (no reviews)5.0
Country: United States
Based In: Silver Spring, Maryland
Performs: Regionwide
From: $500

When contacting this member, please state that you are viewing their Entertainers Worldwide profile.
Request a Quote
Share this Page:
Profile Views: 885
Report this profile

American Stand-up Comedian/Actor/Writer
Born in Baltimore, Maryland
Experience: 7 years
Notable Venues/Projects: Shaq's All-Stars (opener), 1st Place Winner of Central Ohio Comedy Festival, Co-Star of Indie Film "A Considerate Husband" produced by Nash Bhatt
Bachelor of Science- Business Marketing
Omar Terrell proves to be a leader in the new generation of stand-up comedy. His wonderful charm and witty behavior sets him apart from other entertainers and gives him a unique stage presence. Terrell has performed as a host, moved up the ladder to open for touring acts, and now features and ... headlines events in the PA, MD, DC, and VA region. His location is telling jokes and his destination is laughter.