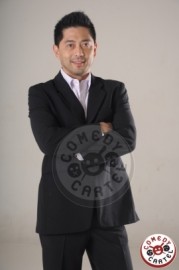 (no reviews)5.0
Country: Philippines
Based In: Manila, Philippines
Performs: Nationwide
From: Contact

Based in Manila, Philippines, he is able to perform at Parties, Corporate events and more.
Request a Quote
Share this Page:
Profile Views: 422
Report this profile

A pioneer of point of view standup comedy in the Philippines. He has been performing his brand of humor to audiences from all over the world except in Germany, where they frown upon Nazi jokes. Tim started his comedy career back in 1997 in San Francisco, California to a full capacity audience of 4 people, including the homeless bum he paid to keep the audience real. He quickly got work in prestigious clubs such as the Punch Line and Cobb’s after helping the wait staff move furniture at closing. After the dot-com bubble burst in 2002, Tim sold his belongings and packed his bags to explore the ... world on his unemployment checks from Uncle Sam. Inspired by his travel adventures, which are documented in his quirky international television program “On-Foot” (which airs on the Living Asia Channel), Tim’s material covers his experiences from growing up in the Philippines, living in the States, and the absurd things he finds everyday. Aside from performing stand-up comedy, Tim writes for travel and lifestyle magazines, is the Comedy VJ for Sony Entertainment’s BeTV “Funnies”, and continues to host for corporate events. Tim was the official comedian of the 2006 Asian Games in Doha, Qatar but was not an athlete despite his prowess in “dama”, the barber’s version of chess.