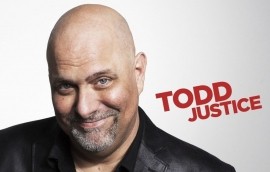 1
(no reviews)5.0
Country: United States
Based In: Carrollton, Texas
Performs: Worldwide
From: Please contact for quote.

"LAWS OF LIFE" - CLEAN COMEDY SHOW "I'm not in a mid-life crisis ... this is war!" From soul-baring self-deprecation, to unbelievable stories and truths about family, weird laws, defensive driving, Texas, health and holidays.
: 469223XXXX Click here to reveal
full number

When contacting this member, please state that you are viewing their Entertainers Worldwide profile.
Request a Quote
Share this Page:
Profile Views: 1136
Report this profile

LIVE PERFORMANCE OVERVIEW:
Typical Gig Duration: 45 minutes
"LAWS OF LIFE" - CLEAN COMEDY SHOW
"I'm not in a mid-life crisis ... this is war!" Todd Justice
The truth is ALWAYS funnier than fiction. Take a break from the holiday stress! With his 100% clean, extremely relatable, hilarious comedy show, Todd hammers the funny home. From soul-baring self-deprecation, to unbelievable stories and observational truths about family, weird laws, defensive driving, Texas, health, and holidays ... your group will be laughing uncontrollably and possibly even high-fiving through all-too-recogni ... zable shared experiences about growing up and getting older.
Todd is a wonderful, gifted performer. You can't go wrong booking him at your events. He can perform corporate "clean," but still leave the audience in stitches. Todd is easy to work with and a consummate professional. On time, well dressed and is great with an audience or one on one.
Melinda Corder - CMP, President/Owner at Encore Productions

"Todd masterfully tailored the material to fit with the theme of the event. His energy and hilarity started our clients off in a great mood and ready learn more about our company! I will absolutely hire Todd again!" (Bill Downing, Owner - Walton Stout Productions)
For almost two decades, Comedy Justice has been served up on a golden plate of mock sarcasm and agony. Todd takes any misery of life and makes it unbearably funny, with one-liners flying and true hilarious stories you wouldn't believe. After two years in the Air Force, then selling appliances and not quite succeeding as a musician ... ... he stumbled upon comedy. By that time, he had plenty of material! In January of 2004, he released his debut comedy cd, "AND JUSTICE FOR Y'ALL." The disc has garnered rave reviews and national airplay on XM, Sirius, AllComedy and Comedy101 radio. Later that same year, he was able to bring his own brand of laughter to the US troops across Europe and Asia, Bahrain (twice), Kuwait and Iraq. Justice has appeared on TV's "Family Feud", Ed McMahon's NextBigStar, as a Catholic softball catcher on the upcoming comedy release "Boys of Summerville" (his first major role), and his left ear has even appeared as an extra on the short-lived series "LAX".
2011 Winner of the Dallas Comedy Showdown - Dallas, TX
2016 Winner of the Clean Comedy Challenge - Pasadena, CA
A Few Of The Companies Todd Has Entertained:
United Way, CVS Pharmacies, Outlet Warehouse Liquidators, General Shelters Corporation, Creme de la Creme Preschool, Warp Computer Consulting, A Touch of Color, Slovacek Sausage, NAPA Auto Parts, Agile Alliance, Champions Cove Retirement Center, Papa John's, Garden City Co-Op, Checkpoint Software ...
Locations Around The World Performed In:
Atlanta, Austin, Dallas/Fort Worth, Cleveland, Vancouver, Baghdad, St. Louis, Austin, Germany, Japan (Tokyo), Bahrain, Amsterdam, London, S. Korea (Seoul), Guam, Edmonton, Kuwait City, Calgary, Belgium, and many, many more!

Tons of Testimonials on LinkedIn!