You are contacting Steven Brown 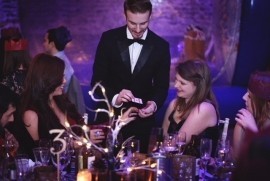 Steven is a professional, award-winning close-up magician. Steven takes the traditional form of magic and flips it 360* Steven can perform both in a close-up setting or in a staged scenario with ease! Experience the "closest thing to real magic".
: 0748053XXXX Click here to reveal
full number

When contacting this member, please state that you are viewing their Entertainers Worldwide profile.
Contact Me / Request a Quote
Share this Page:
Profile Views: 579
Need Help?